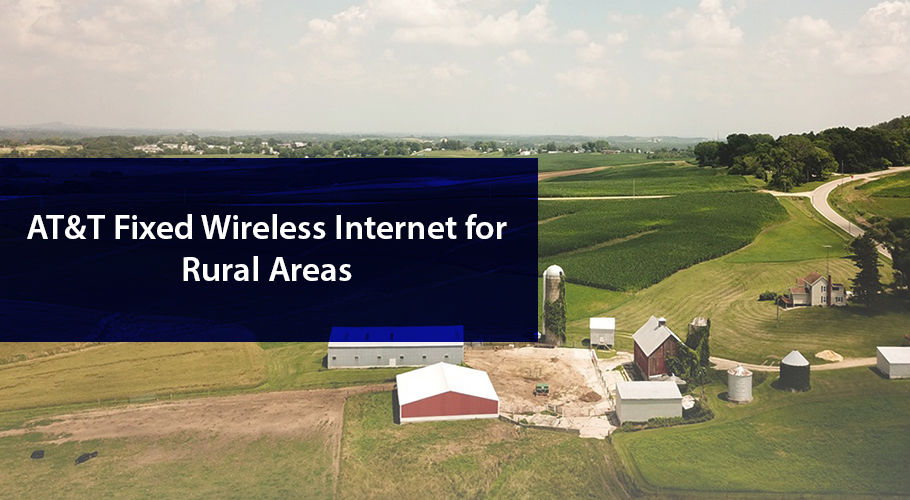 The internet is a modern-day essential in this digital age. Not unlike electricity and gas, it has become a basic necessity that sustains the modern lifestyle. Yet, a huge cross-section of the American population remains deprived of this powerful tool, mostly those living in rural areas.

People living outside the urban infrastructure find it difficult to access high-speed internet mainly because there isn’t a huge list of rural internet options to choose from. Most internet service providers find it unprofitable to extend their infrastructure into rural America and state the simple economics of supply and demand as a deterrent. But, then again statistics show as opposed to 83% of urban and suburban adults who go online at least once every day, 76% in rural America do likewise. Meaning, the demand is there, even if not as consistently high as in the urban or suburban regions.

AT&T is one of the topmost internet service providers in the U.S., which is leveraging available technology as optimally as possible, so this digital divide can be bridged. Not that other ISPs are not delivering services in different rural regions of the U.S., AT&T comes forward with 3 different options across its service states—which are affordable and practical, and help the rural population stay connected. Plus these services come with the AT&T name tag—so, it is safe to presume they would spell reliability and quality.

Fully aware of its stature and its commitment to the FCC initiative, AT&T has endeavored to ensure it utilizes the latest in internet tech to deliver fast and reliable connections far and wide. For this reason, AT&T has thus far made the best use of its preexisting copper infrastructure to provide high-speed rural internet. And, more recently the provider has also been employing wireless LTE technology to deliver fixed wireless internet for rural areas. While AT&T mobile broadband is now accessible nearly to the entirety of the U.S. territories.

Moving forward, AT&T plans to roll back its DSL-based wired internet service, while expanding the coverage of its fixed wireless internet.

In rural America, the phone line copper network has been available for a very long time—making DSL internet a common option. So, as AT&T began to extend the fiber optic backbone in its infrastructure farther out, it was able to reduce the “last mile” over copper lines. And, this has resulted in considerably high speeds delivered via an AT&T IPBB connection. While urban and suburban areas are the main beneficiaries of this hybrid Fiber-Copper network, rural populations residing close to the AT&T hub are also able to access high-speed internet. Albeit, if your rural home is located far away from the AT&T hub, you are not able to access more than Basic Internet from AT&T—at this point in time.

In March 2020, AT&T announced it covered 880,000 customer locations with its LTE-based Fixed Wireless network—and undertook to extend the coverage to a total of 1.1 million by the end of the year. Having embarked on the journey of building and spreading out its Fixed Wireless network back in 2017, AT&T has made considerable progress since.

Unlike wired or satellite-based networks, fixed wireless internet does not ask for complex infrastructure. The philosophy is simple. As long as you are in the line of sight of the provider access point, you’ll be able to receive the signal and connect to the internet. You don’t need wires laid out to build your home internet connection or an expensive satellite dish. All you need is an antenna installed outside your house, preferably with no obstacles in the line of sight, its power supply, and a wireless modem for your in-home Wi-Fi network.

The backhaul connection, which transmits the signal, is wired—in most regions fiber optic. But, the signal is directed to the consumer location wirelessly, via a series of towers. As long as you are in the line of sight of the AT&T access point, you will receive the signal via the antenna, which will be then broadcast via your gateway device over your in-home network.

The AT&T Wireless network utilizes both 4G LTE and 3G LTE tech—its 4G network extends to about 60% of the U.S., while the 3G network covers about 70%. Albeit, there are over 30 states where coverage is less than 90%.

Given the AT&T network speed is among the fastest three in the U.S., mobile broadband from the provider can become a viable rural internet option—for residents of areas that lack coverage from AT&T’s wired or fixed wireless network. Because you can pair it with an AT&T mobile hotspot device, and get a secure internet connection for your devices via Bluetooth, Wi-Fi, or a USB cable. With download speeds over 30 Mbps on the AT&T 4G LTE network, this arrangement can do the job for your family with ease.

A problem may only occur when you are in an area where 4G coverage is not available and AT&T Wireless service is delivered via 3G. But then again, AT&T has already announced it is rolling back the 3G network by 2022 and replacing it with 4G LTE. Meaning AT&T Wireless is a real contestant when it comes to residential rural internet services—that is if fixed wireless and DSL options are either not available or not in line with your preferences.

Now that we have walked you through the internet types available from AT&T in rural areas, let’s give you an idea of what kind of plans and prices are on offer.

As we mentioned earlier, with an IPBB connection from AT&T you can get speeds up to 100 Mbps, depending on your distance from the AT&T central node in the area. But, if you are farther away, available speeds may fall down to basic level traditional DSL.

AT&T Internet is available standalone as well as in bundled packages—for instance, you can pair up your AT&T Internet with DIRECTV, and save money for one full year of promo pricing which is available to new customers. Not to forget, the FREE installation benefit when you bundle AT&T services. But, whether or not you bundle, other benefits of an AT&T Internet plan include a comprehensive online security suite with plans above 5 Mbps, access to a nationwide network of Wi-Fi hotspots, and free email account(s) with unlimited storage.

As for AT&T fixed wireless internet, if traditional wireline service from AT&T is not available, you become eligible for AT&T Fixed Wireless. AT&T comes out to install the wireless equipment at your premises and sets you up to receive the benefit of its fixed wireless network.

There is only a one-speed tier available given the type of this connection, so speed-wise there is no much of a choice. In any case, speeds that get delivered are adequate for standard household usage. As it is with other AT&T internet types, you can pair up your AT&T Fixed Wireless with DIRECTV , and enjoy a discount for the first 12 months.

AT&T Wireless with its unlimited 4G internet plans is a great option for rural America—if you don’t mind moving away from the standard way of accessing the internet, and AT&T Wireless plan can come in very handy—and you can easily put it to everyone’s use via an AT&T hotspot device. The best part is AT&T Wireless plans come with appealing service features, and also allow 5G access where available (provided your device(s) is 5G compatible). Moreover, when you bundle AT&T Wireless with DIRECTV, again that is a bargain deal at a discounted rate for 12 months.

While you may consider AT&T Wireless as the last resort for your rural home, we’d suggest you give it a chance—with 4G soon replacing all 3G areas, and 5G coverage spreading fast across the U.S., you can actually land a value-packed deal with an Unlimited AT&T Wireless plan that fits your needs and pocket.

AT&T Fixed Wireless internet is an innovative solution for those seeking the best rural internet. And, as AT&T moves forward with spreading the reach of its fixed wireless network to more and more service locations, the probability of subscribing to it increases for everyone residing in these rural regions. And, with wired copper internet now entering the rollback phase, it looks like in the near future AT&T Fixed Wireless and AT&T Wireless (5G or 4G) will together shape two practical, affordable and valuable rural internet options.

If you find yourself interested in the AT&T Wireless plans for consumption in your rural home, contact AT&T experts at 1-855-925-2541, and get pro advice about a suitable plan to subscribe to.

Given the AT&T network speed is among the fastest three in the U.S., mobile broadband from the provider can become a viable rural internet option—for residents of areas that lack coverage from AT&T’s wired or fixed wireless network.

How much is AT&T Fixed Wireless plan for?