Why is DOTA 2 So Popular? 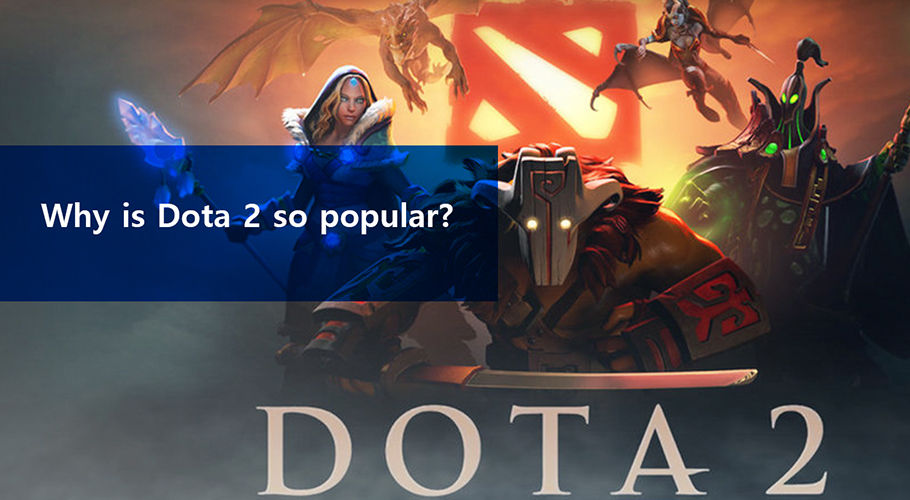 A lot of new games have gained momentum in recent years in the world of competitive gaming. However, the big wigs of online gaming are still unbeatable and thriving to the core – adding millions of players to their arsenal every day. Among the goliaths of the online gaming arena, Dota 2 is still pretty much alive and kicking, and considered one of the best games in eSports.

But what makes this game such a crowd-puller?

Sure, it is addictive and gets you hooked once you start playing. But what makes Dota 2 so famous in terms of earning big bucks even after all these years? Well, we have brainstormed to pick a few smart moves that helped push Dota 2 to new heights of mass popularity year after year. But before we dive into the reasons that made Dota 2 the talk of the town, let us see what the game is all about.

Dota 2 is a Multiplayer Online Battle Arena (MOBA) video game. It is a spinoff of the Defense of the Ancients (DotA), which was a mod for Warcraft III: Reign of Chaos and its expansion pack i.e. The Frozen Throne.

This action-packed game began to take shape in 2009 when Valve Corporation snagged DotA head developer IceFrog. The source game engine was revamped following that, and the characters and complexity levels of the game were tuned up to make each match super engaging. Indeed it was the iconic gameplay and zest that worked together to produce such a mass appeal for Dota 2. As a result, Dota 2 soon took the gaming world by storm and became an award-winning eSports game loved by millions!

Another reason why we root for Dota 2 is that gamers do not need to spend a dime to buy or unlock any gameplay elements or playable heroes as Dota 2 is totally free-to-play.

Dota 2 is owned by Valve Corporation. Valve is a U.S. based digital distribution company as well as a video game developer and publisher with its headquarter in Bellevue, Washington. Apart from the Dota series, Valve has also developed Steam—a video game digital distribution service, where Valve could provide automatic updates for games developed by the company—quite like a software distribution platform which has now expanded to include games from third-party publishers. Apart from Dota 2, Valve has produced countless other games like Counter-Strike, Day of Defeat, Left 4 Dead, the Half-Life, Team Fortress, and Portal.

How Many Characters in Dota 2?

Dota 2 has 100 unique avatars called Heroes that embody each player in the game. The heroes possess a distinct set of powerful skills and strengths along with unique weaknesses and require different props and situations to amp-up the gameplay.

In most cases, heroes carry four abilities: three regular and one ultimate. The ultimate ability can change the face of the game almost entirely. Players have the liberty to pick from a myriad of characters. However, only one hero can be controlled during the course of the game. That is why, picking up the right hero for the right situation is the core aspect of playing Dota 2 – it is the blend of characteristics, abilities, and items that define the role they can play.

How Many Dota 2 Heroes Are There in the Series?

Currently, there are 119 unique heroes in Dota 2, and nearly all characters are taken from the predecessors DotA Allstars and Warcraft III. The original Dota 2 creations include Monkey King, Pangolier, Dark Willow, Grimstroke, and Mars.

How Many People Play Dota 2?

Why is Dota 2 So Popular?

Want to know why Dota 2 is so popular? Let's find out what makes Dota 2 one of the most successful games of all times.

Dota 2 is nothing like your regular video game as competency is measured in different terms compared to most other games. Playing Dota 2 is like you are playing a team game or a sport – and that is why it makes more sense too - it requires a fundamental skill set and critical thinking with depth, scope, and speed.

Each team consists of 5 players who pick their avatars that compete against the non-player characters (NPCs), for the heroes to move to the next level. The avatars or heroes are picked based on their skills and attributes and the opponent’s strengths and weaknesses in order to execute the game plan successfully.

Like most of the games in the MOBA genre, Dota 2 is also free. So, anyone, anywhere with a stable internet connection can play this thrilling game. All you need is a good mid-range laptop or PC, and you are good to go.

Dota 2 works seamlessly on consumer-grade PCs as well as mid-range laptops as they are completely capable of running games in high-quality graphics. However, your PC does need to have the minimum system specs i.e. 4 GB RAM, an Intel dual-core processor, and an NVIDIA GeForce 8600/9600GT to run the game smoothly.

Moreover, as eSports and network bandwidth go hand in hand, you do need a fast and reliable internet connection with at least 10 Mbps speed and low ping to support glitch-free gameplay. > Enormous Prize Pool

The prize pool of The International, the biggest Dota 2 championship, smashed all previous records in 2019 by boasting a staggering amount of over $33 million—adding nearly £10 million compared to last year’s tournament.

Dota 2 prize pool has increased exponentially since the very first competition 9 years ago. The first ever prize pool offered was $1.6 million - considered huge at the time. A big chunk of the Dota 2 International budget is collected via crowdfunding drive. For instance, a companion guide alongside an in-game app called Compendium was released by Valve in 2013 – initially it offered goodies like cosmetic skin, loot boxes etc., but over the years Compendium has grown greatly. Especially since Fantasy Dota was built-in, the Compendium is no longer a one-time buy rather you can purchase levels to upgrade your book.

The final round of The International 2019 OG vs. Team Liquid match received tremendous viewership as over 1 million viewers tuned into Twitch to watch the grand finale. The game witnessed a 51% increase in viewership compared to the previous year despite the 12-hour time difference. The finals kicked off on Sunday at 10am Shanghai local time, which is literally on the other side of the globe relative to the U.S. Eastern Time Zone. So, the viewers started late on a Saturday night and stayed up till Sunday morning.

Even though Dota 2 is not an easy game to play as it has a steep learning curve, and requires a complex strategy to succeed – its ability to draw new blood and maintain a large pool of players is its biggest USP. The more time you spend playing the game, the more you learn. And once you get the hang of it, you’re bound to get insanely hooked! Surely that is what makes Dota 2 irresistible!

So, install Dota 2 to experience the best gameplay ever. However, in case your internet speed is lagging, you could do well by subscribing to a high-speed internet connection.

Even though the player base of DOTA 2 has fallen by around 20% since February 2016, it is not to say that DOTA 2 is dying as the game is still a popular choice on Steam platform with up to 10 million monthly active users. Moreover, DOTA 2’s player base spiked at over 791 thousand on Steam in May 2020 showing the game is here to stay for long.

Is LoL easier than DOTA?

LoL is not easier than Dota 2. The game-style of Dota 2 is somewhat complex and a little different than LoL which takes some time for beginners to understand as compared to LoL.

Is LoL bigger than Dota 2?

Dota 2 is known to give out bigger prize pools for their tournaments as compared to LoL. Over the years, Dota 2 has attracted a greater fan base and distributed larger prize money compared to LoL.