What Channel is CBS on AT&T TV? 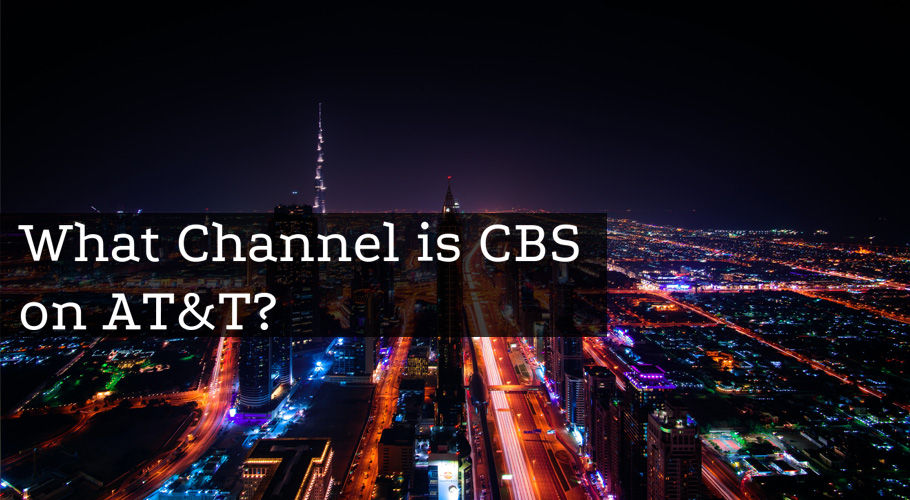 What fascinates you the most? If we were to answer this question then it’d be the history of everything. Imagine if such a piece of history was lighting up the TV sets in your home, would not that be one experience worthy of not missing out on. Circa late 1920, just when the hype for a rectangular box that plays images began to surface, some people got to work. And their efforts gave America its long-anticipated commercial broadcast television network, CBS.

At 93 years of age, the CBS network stands unbeatable. Well, why wouldn’t it? It’s still reaching millions of entertainment-devotees, all thanks to the top TV service providers like AT&T (for ESP user AT&T Español).

AT&T TV with its feature-rich service is now breathing life into TVs across the U.S. Futuristic features like using your voice as remote control via Google Assistant, let you switch between channels, sift through content on DVR, and do more, without even touching your TV’s remote. AT&T TV lets you enjoy thousands of On Demand titles that you can watch whenever you feel like treating yourself. Plus, with an extensive range of channels including top American networks like CBS and more, it’d be only logical for you to give AT&T TV a chance.

You can opt for AT&T TV on its own or you can take things up a notch. The TV service from AT&T allows you to bundle it with the high-speed AT&T internet service (for ESP user AT&T internet Español). And that means, your dream of enjoying the next-generation of TV can readily turn into a reality.

CBS – The Network with an ‘Eye’ that Conquered it All

Columbia Broadcasting System or CBS is America’s oldest commercial broadcast TV and radio network, owned by the entertainment group division of ViacomCBS. The CBS network stands among the top 5 major broadcast television networks in the USA. Since 1951 CBS has had the trademark symbol of an eye, hence the nickname ‘the eye network’. The radio network operated under CBS until 2017, after which it ended up merging with another American commercial broadcasting company Entercom. Now, CBS doesn’t operate radio stations and focuses solely on its television network.

When it comes to the CBS broadcast lineup, let’s just say that CBS has set its bar way up there. The channel has divided its programming into two divisions: Daytime and Primetime. Daytime programming goes on air from 10:00 AM to 3:00 PM (Eastern & Pacific) on weekdays, whereas Primetime programming goes on the air from 8:00 PM to 11:00 PM Monday through Saturday and from 7:00 PM to 11:00 PM on Sundays. Besides the entertainment-packed lineup, you can also catch up on local news, classic game shows such as The Price is Right, soap operas like The Bold and the Beautiful as well as the popular talk show The Talk.

Late-night TV shows have always been quite popular across the world. Thus to feed the devotion of late-night show fanatics, let’s just say that CBS is offering crème de la crème. With Stephen Colbert and James Corden as late night show hosts, we bet you’re already contemplating placing your order for AT&T TV. Okay, time for a little fun fact for you: in 1964, The Beatles made their TV debut with their iconic performance on CBS’s Ed Sullivan Show. Later in 2019, the biggest boy band in the world, BTS paid tribute to Beatles’ performance and to say the least, they nailed it! The art direction; the B&W color mode; everything took us right back in time. This is definitely another reason that earns CBS a 10/10 for its creativity and novelty.

Besides the iconic game and late-night shows, CBS offers insightful news programming as well. On weekdays and Saturdays, you can catch CBS This Morning at 7:00 AM. In evenings there’s CBS Evening News, and popular newsmagazine shows such 60 Minutes, 48 Hours and CBS Sunday Morning. You can even catch Kids’, sports and other type of programming on CBS, which only confirms this channel will keep every member of your family satisfied. All the ‘remote control’ wars that your household has seen for long, will see a decline when you decide to go for CBS on AT&T TV.

Elevate Your Televisual Experience with CBS on AT&T TV

Imagine if everything from CBS could fit inside a single TV service that’s already providing you with a plethora of features. Things are bound to go upwards from there. Aren’t they? When you go for AT&T TV, you ultimately make your life remarkably simple and convenient.

Well, we’ve already told you how futuristic this particular service is. But, that’s just the beginning. AT&T TV comes in 4 packages, plus a bonus package that lets our Hispanic fellows enjoy their favorite TV shows in their native language. For a family that’s big or small, you can pick a plan that fits your entertainment needs, and that’s pretty much it. Once you’re an AT&T subscriber, the features of the service and the effortlessness that comes along, will make it hard for you to fall for any other service.

The best thing about the aforementioned packages is you can bundle them with the high Speed AT&T Internet and turn your home into an entertainment-packed zone for everybody. Plus save an incredible $240 in the first year of your subscription. AT&T discounts both services for you when you bundle them up!

So, what Channel is CBS on AT&T TV?

The CBS Network on AT&T TV is part of the local channel lineup that is common to all four packages. Albeit, availability of networks does tend to vary depending on the region that houses you. If you reside in one of the 22 AT&T service states, you can check availability of CBS here by inputting your ZIP code. Not only the search will fetch you a list of local channels available for Live streaming, but also the regional sports channels you can access. Remember if you are travelling to another city, you can still watch your local feed. All you need to do is enable location services on your mobile device.

Unlike the flagship CBS channel, the CBS Sports channel comes included in the XTRA and ULTIMATE lineups only – the two more elaborate AT&T TV lineups. Tune into channel number 221 and enjoy the adrenaline rush!

CBS on AT&T TV: Even Better with Sports

Entertainment comes to those who seek it, even if it’s lying underneath Sports. Let’s face it, the fact that our laziness is always ready to glue us to our couches, it’s not bad to resort to TV content that inspires us to jump right back on our feet. With sports programming on CBS Sports Network, you can keep yourself entertained and active by watching the best athletes outshine one another. And all you need is an AT&T TV subscription to make that happen.

To sum it up, with a TV service as contemporary as AT&T TV, that does not let you lose the charm of traditional TV despite the infusion of latest technology, and also brings you the opportunity to experience the quality of AT&T services at competitive price points, an AT&T TV subscription has little chance of turning into a regret!

Call 1-855-820-1220 if you need further information or if you are convinced about making AT&T TV your entertaining partner.

What Channel is CBS on AT&T TV?

You can check for CBS availability in your area by putting your ZIP code hereis available in its HD version in all four AT&T TV packages at channel no. 206.

Where can I get CBS on AT&T TV?