Esports: All You Need to Know About This Billion-Dollar Industry 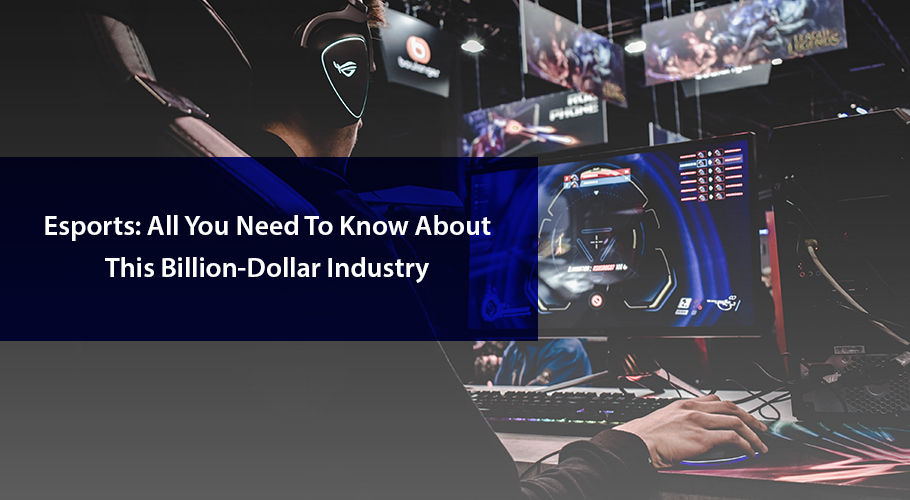 Jam-packed soccer stadiums, millions of viewers worldwide, players admired like rock stars, and winning reward in millions. Not to mention pyrotechnics, fireworks, and loud fans – the environment in the coliseum feels like a grand soccer finale or the Super Bowl. And while the crowd hurrah, the opponents focus hard on achieving victory. But this is not the World Cup. And it is also not the Super Bowl or the Olympics. This is esports – a highly underrated sporting contest that now attracts tens of thousands of bystanders in the gaming realm, and many online fans glued to their screens.

Confused about what esports is? Whether it is a leisure time activity, an entertainment medium, or a profitable means of revenue from speculations, it is pretty obvious that esports nowadays is something everybody should be on the lookout for!

Esports: What’s All the Hype About?

Esports is a video game sport that includes a diverse variety of video games, viewers, and fans. It is played globally, usually by professional players and in tournaments that have boasted record views of more than 100 million fans. For instance, the 2018 League of Legends World Championship tournament became the most-watched esports event with more than 200 million concurrent viewers during its final episode.

Just like any other sport, esports is all about competition. You can say, it all comes down to the performance of every single pro gamer as well as entire teams. What differentiates esports is that here the performance does not take place on a real playing field, but on a screen. Basically, esports are direct contests between human gamers, using appropriate computer games and videos under certain fixed rules.

This implies that esports is far from every game that is well qualified for esports tournaments. Above all, the preconditions are unbiased performance assessment and fairness of opportunities.  The element of chance is most unsolicited in this gaming arena. Several games with a multiplayer mode meet all requirements – be it team-based ground battles, sim racing, or virtual soccer.

Normally, pro players and teams play strategy games, including MOBA (multiplayer online battle arena) games, such as Real-time strategy (RTS) and League of Legends (LoL). Other exceptionally popular genres include fighting and first-person shooter (FPS) games. Despite the fact that these games do not completely fall in the category of strategy games, they entail generous amounts of teamwork, quick reflexes, and skillset.

Real-time strategy games break from the pattern of conventional turn-based games, hence the name. As a game progresses, gamers have to control units to react to different events, and these games mostly include building mechanics and resources to challenge players even more. Some good examples of RTS games in eSports are Warcraft III and StarCraft II.

Multiplayer Online Battle Arena (MOBA) is undoubtedly the most recognized esports gaming genre for award money and viewership. These games initially started as a sub-genre of RTS games and now they have taken the shape of team strategy games in which teams work together against a competing team to finish off their base while protecting their own.

One of the most globally popular esports genres, first-person shooter game includes classic franchises like Rainbow Six, Counter-Strike, and Call of Duty, along with more recently sought-after battle royale genre like PlayerUnknown: Battlegrounds and Fortnite. These games revolve around weapon-based fights through the eyes of the main character and typically call for teams to compete against each other.

There is an array of competitive disciplines in esports, from FIFA to League of Legends. Primarily, two types can be discerned: team-based matches and competition between two players. The first type includes, for instance, StarCraft – a military sci-fi real-time building game in which two players compete for strategic points, resources, and win. Even conventional sports organizations are now getting involved, for example, the ePremier League conducted the first esports tournament hosted by England’s top flight and featured players representing clubs from real-life soccer teams.

On the other hand, team-based games are held in virtual stadiums. This is where giant esports groups and organizations like Cloud 9 Esports, Fnatic, and G2 Esports come to pass. In the shooting game scene, games with a pseudomilitary hint, like Call of Duty, Counter-Strike: Global Offensive, Overwatch, and Valorant are quite popular. As discussed above, esports teams also battle in what are called MOBAs like League of Legends, DOTA 2, and Heroes of the Storm.

How Esports Games Are Played?

Watching an esports live tournament, you will experience a similar kind of setup with which we have all become familiar after watching basic sports like FIFA. Commentators give details about players, teams, tournaments, and leagues, while spectators and esports online audience just watch as the game unfolds. Just like traditional gaming events, tournaments and matches are broadcast live to millions of esports fans that watch esports live score online through streaming platforms like Facebook, YouTube, and Twitch.

There is only one thing hindering the rapid growth of esports — the lack of national and international professional leagues, such as the Olympics or the NFL. Despite that, the industry is growing at an unbelievable rate — the number of viewers has increased by more than 50% since 2016.

The gap due to the absence of an official professional league for eSports has given birth to a unique structured system in the esports industry. Players sort themselves by specific games, which are then run and managed by leagues or tournaments that host big tournaments and establish seasons for the sport.

Wondering where to watch esports online? Just like traditional gaming events, all esports tournaments and matches are broadcast live to millions of esports fans that watch esports live score online through streaming platforms like Facebook, YouTube, and Twitch. Based on viewers’ preferences, some matches are also available on TV through BBC and ESPN.

With the advent of these live streaming platforms, it has become incredibly easy for professional leagues or gamers to reach countless esports fans in real-time. For single players, this means personal one-on-one interaction with fans. For large tournaments, this means instant engagement with countless fans and a sizeable impact on ads that countless viewers will watch as they strive to catch every moment of the match keeping an eye on the esports live score.

So, it is no surprise that the evolving industry of eSports has the potential of big amounts of revenue. Even professional players who are as esteemed in the esports realm such as as Lionel Messi in soccer and Tom Brady in football are rumored to be fighting for millions of dollars.

Thanks to the internet, the rapid growth of esports is simply unstoppable. Plus, the acceptance of virtual sports is also increasing. Gone are the days when gamers were called nerds; today they are the superstars of the multi-billion dollar esports industry. To say the least, it is going to be absolutely fascinating to see where this journey leads.

Esports is a video game sporting competition that includes a diverse variety of video games, viewers, and fans. Just like any other sport, esports is also competitive. The only difference between esports and traditional sports is that in esports competition takes place on a real screen instead of a field.

Is esports a sport?

Just how video game qualifies as real art and entertainment, esports also qualifies as a real sport. It has more or less the same emotional effect that other physical sports have. Also, esports engages a large number of spectators and viewers, often higher than that of physical sports tournaments.

How do I get into watching esports?

All esports tournaments and matches are broadcast live to millions of esports fans that watch esports live score online through streaming platforms like Facebook, YouTube, and Twitch. Some matches are also available on TV through BBC and ESPN, depending upon viewership.

What is esports gaming?

Where can I watch Esports online?

You can take benefit from free online esports streaming readily accessible in 2021, with some of the biggest live streaming services like YouTube, Facebook, and Twitch. You can watch esports, including League of Legends, Fortnite, and Dota 2 through live streams, or tune into matches you like that have already been played.