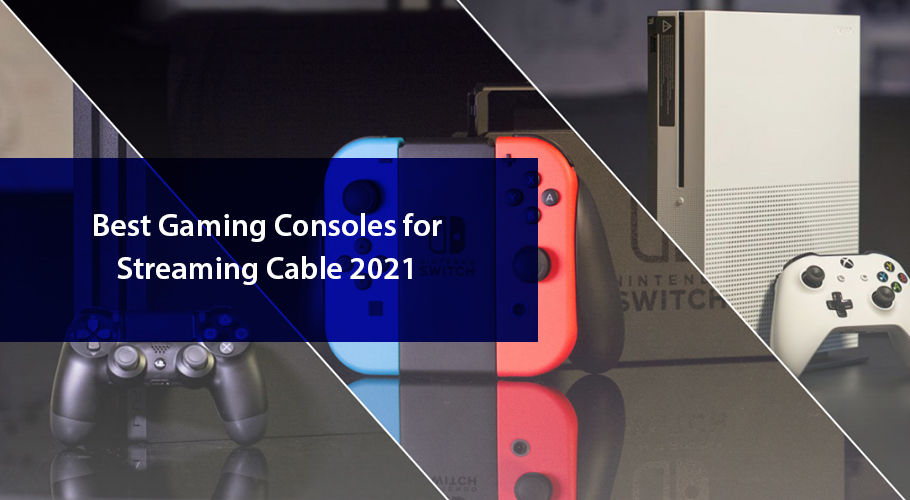 Consoles designed prior to 1995 performed only one function, i.e. play games. Gone are the days when gaming consoles used to be dedicated gaming machines only.

Present-day’s gaming consoles are manufactured to perform way more than just run-kill your friends and zombies in Battle Royale games. In fact, they are strong enough to be the center of a state-of-the-art home entertainment regime, capable of streaming all of your favorite on-demand video services.

There is no wonder if you are looking for a new gaming console in 2021. However, there are so many options available out there, it is really a daunting task to sort and pick one out of the lot. Plus, it highly depends on which type do you like? Some are handheld and portable, while others are typical gaming and streaming consoles with ample storage memory. Make up your mind regarding what you want and then pick the right gaming console to fulfill all your gaming and streaming needs.

We have put together a list of some of the finest gaming consoles below, so you can make an informed decision.

Microsoft Xbox Series X is no doubt a complete game-changer in the world of gaming consoles. Although it is neck to neck with Sony PlayStation 5, it supports more streaming TV and music apps than PlayStation 5 and exceeds all other already existing consoles in terms of performance.

For streaming, the two major specifications you should look for are supported apps and resolution. Luckily, the Xbox Series X offers up to 8K UHD resolution along with loads of streaming TV apps. However, most of its high-quality resolution applies to gaming only.

The Xbox Series X also allows you to play video files using your external hard drives as it brings at your disposal an optical disc drive to play CDs, DVDs, Blu-ray, and UHD Blu-ray discs.

Playing files and discs is unrelated to streaming TV, but they still make for a versatile TV-watching journey on the Xbox Series X.  Altogether, it brings at your disposal maximum streaming power and the most options.

Sony PlayStation 5 is not just an advancement for gaming, but the hardware can also become a station for streaming entertainment. A PS5 without HBO Max, Disney Plus, or Netflix can never be a worthwhile console for a user who wants to get a complete package in the name of a gaming console. PS5 offers 4K graphics at around 120Hz refresh rate and supports 8K output.

Just like Xbox Series X, this console also includes an optical drive to let you play all your CD, DVD, Blu-ray, and UHD Blu-ray discs, and it also plays video files from your external hard drive. Again, as mentioned before, it is a very tough competition between Sony PS5 & Microsoft Xbox Series X.

No matter which one you may opt for, both are guaranteed to serve you right. Xbox will get to the PS5 in terms of more gaming options—just like the PS5 will get to the Xbox Series X, which includes more streaming video apps.

The console’s controller allows you to seamlessly switch between wired and Bluetooth mode. The Pro is not only compatible with PlayStation VR but also provides an excellent gaming experience. It also offers apps for popular streaming services—Amazon Prime Video, Netflix, Spotify, and Hulu—besides the PlayStation Vue.

So, if you have a 4K television or you play VR games, the console’s performance is good enough to meet all your high-fidelity gaming and high-quality watching needs.

Xbox One S performance is admirable with Ultra HD TV but it is still not as good as Sony PlayStation 4 pro. It offers customers 4K resolution and the option to either upscale games or offload that task to your TV. If you want to stream apps like Hulu, Amazon Video, YouTube, and Netflix on your gaming console, the good news is that all these apps are available in 4K version on Xbox One S.

In short, X-box One S is the primary gaming machine that allows you to play HDR quality games. It offers an impressive real-looking gaming experience with vivid colors, true visual depth, and high dynamic range. You get to choose from a diverse range of games to play via a disk or download online. Some of the Xbox One S exclusive games include, Gear of War, Halo, and more.

If you are interested in playing multiplayer games, then the Xbox game pass lets you do so. The pass also gives you the credibility to buy downloadable content that improves and enhances your overall gaming experience.

If both watching movies and playing games are important for you, then the Xbox One may be an ideal option for you. This console lets you enjoy movies and games in the best picture format. As a cherry on top, Xbox One X comes packed with huge raw power. It includes an 8-core CPU, which is clocked at 2.3GHz, 6 teraflops GPU power through a 1172MHz GPU, and a 12GB GDDR5 RAM chip.

Another appealing thing about Xbox One is its attractive matte black color. Plus, it comes with a variety of other features like 4K Blu-ray player and HDR video playback, which is more or less similar to Xbox One S. The enhanced graphics of games is its top feature that makes it the most robust gaming console after Xbox Series X.

Nintendo has now muscled its way with Nintendo Switch as the finest consoling model. It is also a lot better than all its predecessors and hence a leading handheld games console available in the market. It is basically a hybrid console that brings at your disposal effective connectivity options with your television set. It also works great as a handheld gaming console that you can use with your friends or family. Above all, Nintendo Switch TV mode lets you connect the gaming console to your TV or by plugging in the dock.

This is certainly a full-feature console with a plethora of entertainment options and is an ideal choice to satisfy the gaming and streaming needs of your entire household. Both kids as well as adults will love to play games on this console and it is definitely a must-have for everyone who has grown up playing Zelda, Mario, and a bunch of Nintendo games.

All in all, this gaming console is the perfect handheld console for those who want to try something different that is beautifully designed, equipped with hard-to-resist features, and includes almost every other most sought-after title.

When you decide to invest in a new gaming console for streaming cable, understanding what to look for is crucial. To help you in this regard, we shared our comprehensive guide covering all the best and latest console models for gaming and streaming. Keep in mind that for a seamless streaming experience, you first need to invest in a reliable internet service provider, else you will never be satisfied with your TV-watching experience.

Whether you have some extra money to spend or you are tight on a budget, we would recommend you go for a gaming console that perfectly fits your requirements for a purchase you would not regret.

Microsoft Xbox Series X is the most powerful gaming console ever. An SSD (Solid-state drive) and massive power mean it stands close to PS5. Plus, its prices are similar too.

In terms of download-an-app-and-go programs, there are only three best streaming services for gaming available for purchase: PlayStation Now, Google Stadia, and Nvidia GeForce Now.

PS4 offers some of the most sought-after streaming apps, like Amazon Prime Video, Hulu, and Netflix, but it includes fewer apps than other streaming devices.

Xbox Series X is unquestionably the most robust gaming console ever created. It powers up to 12 teraflops of graphical performance for extremely detailed native 4K games at around 120 frames per second on other supported screens.