The Best Media Streaming Devices for 2021 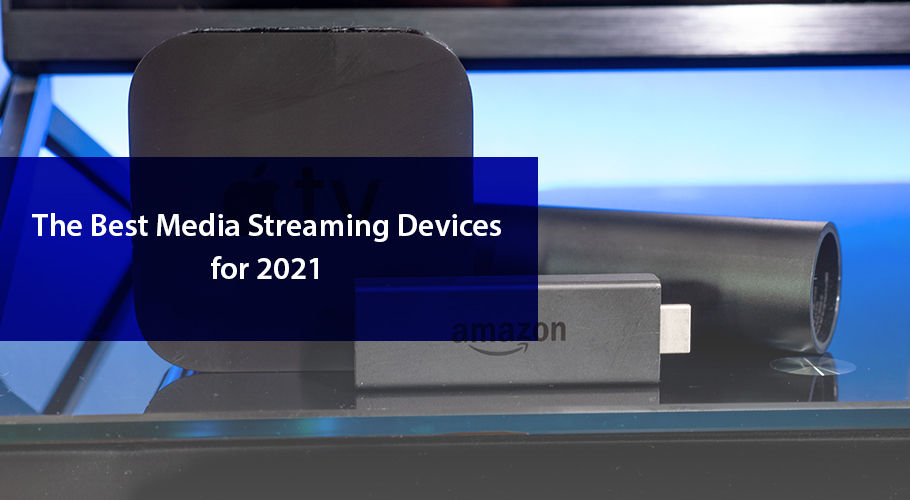 Gone are the days when you needed a cable subscription to catch up with all the latest TV series. Nowadays, you can find a variety of quality shows and movies on multiple streaming platforms. The ideal way to access these platforms is through a TV, and luckily there are several devices available in the market to help make your streaming journey as seamless and flawless as possible.

We have picked the top four highest-rated streaming devices of 2021 to help you figure out which one is your best bet for streaming Hulu, YouTube, Netflix, Disney Plus, HBO Max, and more on your TV. So here we go!

With Alexa as a personal assistant, 4K HDR, and brilliant performance, the Amazon Fire TV Stick 4K is the best streaming device you can get. It offers invincible value, support for multiple HDR formats — including HDR10 and Dolby Vision — and an amazing remote that can control your television’s power and volume, including a mute function.

Of course, you may access Amazon Prime Video as standard along with Netflix, Now TV, Disney Plus, Apple TV, and BT Sport. Plus, the terrestrial catch-up services like ITV Hub, BBC iPlayer, My5, and All 4. As well as the perks of music services like Deezer, Spotify, Tidal, and Apple Music. The only peripheral exclusions are Google Play Movies & TV and an official Rakuten app.

Despite that, Amazon Fire TV Stick 4K is not absolutely perfect — its operating system isn’t that extraordinary and is too Amazon-focused. The interface includes ads on every page and it prioritizes Amazon content while downgrading Netflix and other streaming services to also-ran status. Also, the YouTube TV subscribers have been downright ignored.

To add fuel to the flames, the Fire TV does not perform remarkably well for suggestions either — the search results lack accuracy along with displaying fewer results.

That said, it is worth considering that Amazon's latest Fire TV OS will make an appearance on the Fire TV Stick 4K in the next few months. And that could be a card up its sleeve in terms of usability.

Yes, Google finally launched a Chromecast with a remote — capable enough to replace your TV's remote — making the company's standard streaming device a whole lot more perfect. Above all else, the hardware now includes the Android TV OS that pulls out all stops to encompass all of your streaming preferences into a single detailed guide. Well, it does not completely live up to its aspiration, but it comes quite close.

It brings at your disposal the 4K UHD streaming with HDR and Dolby Vision support for the finest picture quality, and Dolby Atmos for an amazing sound experience. Also, it has got Google TV, an operating system and interface which is pleasing to the eye, more intuitive, and outstanding at giving watching suggestions. The device supports more than 6,500 Android TV apps, meaning you get everything from Netflix to Peacock to Disney Plus as well as HBO Max. Even Peloton is there too, which not many streaming devices can boast of.

Another greatest plus is the Google Assistant voice search, which works pretty well in finding quality stuff to stream. Not to mention its splendid integration with other Google services, including YouTube TV and Google Photos.

Well, there are a few downsides too — the menu does not give a lot of customization options. You cannot use this device to draw power from the USB port of your TV. However, you can still cast apps from your smartphone if you want, but the on-screen selection makes it easier for you to discover the most sought-after shows and movies, and watch it right on your TV screen.

The only proviso is that it does not give you access to Apple Music or TV. So, if that’s a deal-breaker for you, then you may opt for Amazon 4K or the costly Apple 4K. Overall, the device offers great value and is a wonderful choice for anyone, who loves living in Google’s world.

Roku got pretty much everything right with its latest streaming stick. Starting with the remote — Roku has always offered stellar remotes — but this is the first time the company has made its voice remote available in a streaming device priced below $50. It also raised the stakes by including controls for TV power, volume, and mute — prompting you to wonder if you will ever look at your current TV remote again.

It offers a content-agnostic platform that does not favor any specific media streaming service, like Apple or Amazon Prime Video over another. The Roku Express 4K is surely the cheapest streaming TV option providing 4K HDR. That topped with UHD quality and peppy performance means that this is the perfect streaming device for anyone on a budget. Thanks to the AirPlay update, this Roku device makes screen mirroring and streaming content from your iPhone or any other Apple device a snap.

The package comes along with an HDMI cable—you can mount it via an adhesive strip to the back of your TV. The bad news is that this device does not support Dolby Vision HDR and has no universal guide to assist users in understanding better all their streaming options. That said, overall this is a feature-rich video-streaming box for a very decent price tag.

The all-new Apple TV 4K is exceptional and performs like magic. This box of tricks presents the conventionally slick and deft experience one can expect from Apple, for all the valid reasons. Performance has taken a turn for the better — Apple TV 4K 2nd-gen supports 4K format at 60fps with HDR at 30fps. Not many apps have the potential to offer this level of quality unless it is concerned with sports or other fast-tracked action, but it will gradually become more prevalent.

If you hated Apple old remote’s interface, brace yourself, because the new Apple TV 4K’s redesigned Siri Remote offers everything you ever wished for. It not only keeps possession of touch and gestures but adds real buttons topped with an intuitive jog wheel that remembers yore’s old iPods too. However, the only drawback is its sky-high price.

The best thing is that Apple TV 4K has a user-friendly interface and supports almost any service, including Dolby Atmos and Dolby Vision content. It even allows cord-cutters to use an external TV tuner to enjoy powerful apps and games. And with the advent of the Apple TV streaming service, everything gets much better — iPlayer, Amazon Prime Video, and Netflix are offered with Now TV.

Yes, it is not easy on the pocket and is comparatively way too exorbitant. But if you glory in the Apple ecosystem and you have the budget, it is definitely worth the money value for any home streaming enthusiast.

Well, there is a high chance you have already heard about the top 4 media streaming services on our list. But gaining comparative details about each streaming device may actually help you figure out which one may be an ideal pick for your streaming inclinations. What you should remember though — as you give chase to cord-cutting — is securing a fast and reliable internet service.

If you are lucky to access a high-speed fiber connection in your area, you should definitely invest in a good fiber internet service to symmetrical internet speeds and unlimited internet data. But if you are low on budget, you can explore cheap internet options in your area and get your hands on reasonable speeds at affordable prices topped with incredibly appealing perks. And if you happen to reside in a rural area, check out some high-speed rural internet deals to reduce lags and buffer loops as much as possible. Happy streaming!

For Amazon Echo owners and Amazon Prime subscribers, Amazon Fire Stick is a better choice due to its Amazon-focused interface. On the other hand, Roku may be more valuable for those who love streaming 4K HDR content and plan on subscribing to multiple streaming services.

Apple TV 4K 2nd-gen outshines all its competitors by offering 4K format at 60fps with HDR at 30fps. Not many apps have the potential to offer this level of quality.

The Roku Express is surely one of the cheapest streaming devices out there, and it does not even compromise on quality by offering a good interface with basic HD playback. For anyone looking for a simple yet affordable streaming solution, the Roku Express is the best bet.

Streaming devices are widely used to stream audio and video on Smart TVs. All you have to do is connect your streaming device to your home network using either Wi-Fi or Ethernet cable. After that, your device will start loading all the available data first into its processor and then onto your TV screens.