Can I Hide Text Messages On My AT&T Bill? 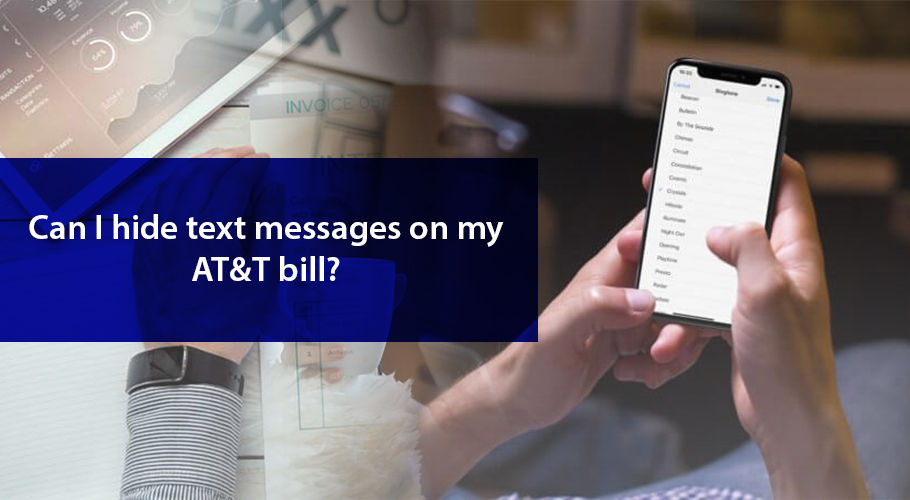 Online privacy is a tangible asset. Once your privacy is under attack, there’s not much one can do to recover from it. Whether you're browsing the internet for sensitive information, or stalking someone's profile on Facebook, using the internet for any online activity makes you vulnerable to online theft, fraud, and malicious attacks. Your internet service provider plays the biggest role in maintaining your online privacy and AT&T is one that prides itself in taking care of its customers.

No matter how trivial some things may be, we don’t want to share them with the whole world. Whether it’s your search history or your call log, some things are better off kept as a secret. AT&T prioritizes transparency with its customer yet maintains their privacy as well. From phone bills to usage reports, AT&T highlights all billing procedures of your internet usage with utmost transparency.

For privacy reasons, you may want to hide text messages and call history on your AT&T bill but don’t know which step to take. Luckily, you’ve come to the right place. This brief yet in-depth guide will help you understand AT&T billing procedures and learn how to hide text messages on your monthly AT&T phone bill.

How to get text message records from AT&T?

AT&T wireless customers cannot view the content of text messages on detailed billing statements or the AT&T website, but another viable option customers can consider is the AT&T Message Backup & Sync service.

The messaging app stores the messages for up to 90 days, after which the messages will be deleted from the AT&T cloud, but remain on your smartphone if downloaded.

Why don't iPhone messages show on the AT&T bill?

Using iMessage is relative to data usage and not SMS, therefore your final billing statement will not show iMessage data usage.

Can I see text messages on the AT&T phone bill?

AT&T wireless network users can log onto AT&T's official website to download phone and data usage reports for their account. AT&T allows you to view up to 16 months of data, text, and call usage information across all wireless devices.

You can only view specific text usage details such as date, time, the sender's number, and the receiver's number on an account. Text messages sent on Android phones using the AT&T service will also be highlighted in the detailed report, unless an alternative messaging system or data services like Facebook, WhatsApp, and Instagram, etc. is used. Your detailed report will highlight all SMS and MMS messages. However, it will not include the content in those text messages.

How to hide text messages on my AT&T billing statement?

To hide your text messages in plain sight, you can switch to social media messaging apps like WhatsApp, Facebook Messenger, Instagram, Twitter to name a few. AT&T will not show message details of any messaging app that does not use your AT&T number. Instead, it will only highlight data usage. Adopting different messaging apps is an effective way of hiding text messages on your monthly bill statement.

Keep In mind, for AT&T to share your text message records, you must be using your primary AT&T number with a subscribed internet/phone plan.

Apps to hide text messages on a phone bill

If you want to text people and not have the number appear on your phone bill, we suggest you download and use Texting Shield. The app provides you with an untraceable number you can text with, that doesn’t show up on any phone bill.

Hushed provides you with a disposable number that cannot be traced or linked to your phone. This way the number won’t appear on your phone bill, and you can use the app for private calls and messages.

The app hides your phone number by displaying it as an alphanumeric ID or real phone number. You can send anonymous text messages through Mask My Number, without it appearing on your phone bill

Burner creates a second line for you to call, text, or sends picture messages on. It intercepts your phone line and creates multiple numbers you can share with anyone. With Burner, you don't have to worry about carrying another smartphone.

Pinger is an app that acts as your phone number. You can make calls, send SMS messages, set a ringtone, and much more from a single location. All this happens within the app, so there's no chance your messages can show up on your phone bill.

To Wrap It Up

In a nutshell, you can view AT&T text usage details such as date, time, amount of data, and the sender/recipient's number on your AT&T phone billing. AT&T does not disclose the content of text messages in its billing statements. However, you can check up to 90 days of text messages saved on the AT&T cloud through the AT&T Messages Backup & Sync service.

Can I see text messages on the AT&T phone bill?

You can only view specific text usage details such as date, time, the sender's number, and the receiver's number on an account. Your detailed report will highlight all SMS and MMS messages. However, it will not include the content in those text messages.

Can I hide text messages on my AT&T billing statement?

AT&T will not show message details of any messaging app that does not use your AT&T number. To hide your text messages in plain sight, you can switch to social media messaging apps like WhatsApp, Facebook Messenger, Instagram, Twitter to name a few.