What Channel is MSNBC on DIRECTV? 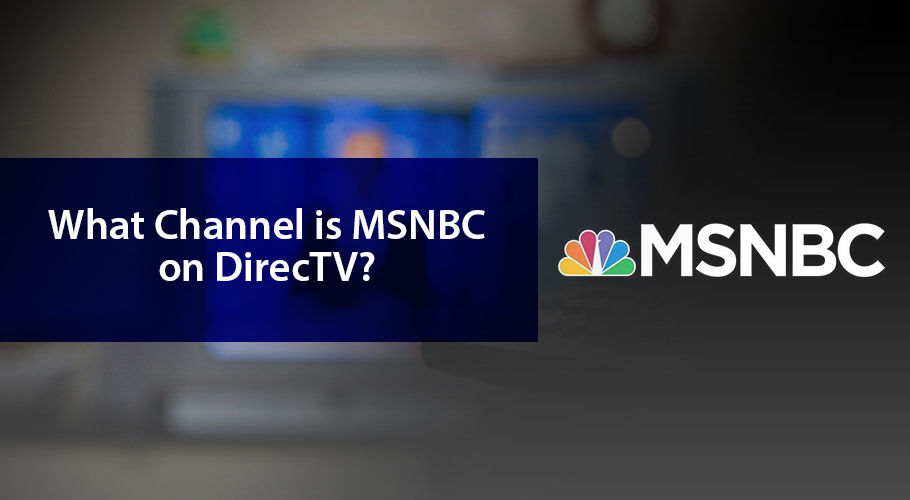 DIRECTV is a popular satellite TV service in the U.S that offers an abundance of jaw-dropping entertainment choices for all TV buffs. DIRECTV packages are designed to bring you the finest TV content in the U.S. in crystal-clear picture quality. All credit goes to the 99% signal reliability throughout the country; it doesn’t matter where you are, if you are under a clear view of the southern sky, you can watch your favorite movies and shows in picture-perfect format.

AT&T DIRECTVgenerously allows you to choose from half a dozen DIRECTV packages to satisfy your TV-pangs, and get the best in-home entertainment for the whole family, without spending a fortune. AT&T DIRECTV channel lineup comes brimming with hundreds of incredible options that all American TV lovers want to watch including FOX, Syfy, Cartoon Network, ABC, VH1, NBC, MSNBC, Nickelodeon, CNN,Freeform or MSNBC, and more.

If you are a news buff and want to stay updated with breaking news and the latest updates at all times, do not fret! With AT &T DIRECTV, you get an optimal variety of news broadcast channels that keep you posted with both local and international news reports including, MSNBC.

On AT&T DIRECTV, you can catch all top shows that currently run on MSNBC including, Morning Joe, MSNBC Live With Craig Melvin, The ReidOut, The 11th Hour With Lawrence O’Donnell, The Rachel Maddow Show, Deadline: Whitehouse and many others.

What Channel is MSNBC on DIRECTV?

If you are an avid news lover who has already subscribed to one of the half dozen DIRECTV packages but don’t know which numbers you must press on your TV remote to catch up on the hottest news on MSNBC, then don’t fret. Here’s a breakdown of all DIRECTV packages along with the MSNBC channel number to save your time and make the channel hunt easier for you.

MSNBC is a news-based Pay-TV cable network in the U.S, owned by the NBCUniversal Worldwide News Group – a wing of NBCUniversal that is eventually the property of Comcast. The channel runs news coverage from the NBC News network along with its news reporting, expert views, and political talk shows and analysis on the latest happenings. MSNBC, as well as its website, came into the news broadcasting scene in 1996 with the collaboration of Microsoft and General Electric's NBC unit, ergo, the channel name carries the initials of both companies. Even though the channel and its website go by the same name, MSNBC and msnbc.com, both carry distinct business structure and news operations.

The website msnbc.com was located in Redmond, Washington at the Microsoft campus, whereas MSNBC stationed at NBC's headquarters in New York City. However, in 2005, Microsoft drew out its stakes in the MSNBC channel and msnbc.com later in 2012. After that, the news website was revamped as NBCNews.com, and msnbc.com transformed into an online home of the cable channel.

In 2015, MSNBC overhauled its programming structure almost entirely from leftist, opinionated programming to hard news programming. The network pursued to hone its news image by forming a dual editorial relationship with its parent company NBC News. MSNBC Live – the network's leading morning news platform further expanded its coverage to over eight hours a day. Moreover, in June 2015, MSNBC introduced a 1080i high-definition (HD) feed to improve the viewer experience.

So, What Do You Think?

While there are 2 satellite TV service providers in America that vow to bring you top-notch entertainment anywhere under the southern sky, DIRECTV leads the charts with a massive subscriber base of 16 million.

DIRECTV packages take your binge-a-thons up a notch as AT&T DIRECTV channel lineup comes brimming with premium content. DIRECTV channel lineup brings you an exhaustive plethora of irresistible entertainment. By offering you an exhaustive choice of as many as 330 channels, which includes everything from local to popular to premium channels. DIRECTV packages are tailored to fully satiate your thirst for juicy TV entertainment without adding a huge amount to your entertainment budget.

Whether it’s primetime entertainment, news, family, kids, educational programming, or action-packed sports—you name it and the wholesome AT&T DIRECTV channel lineup has it all. AT&T DIRECTV also lets you watch Live TV with crisp 4k programming, access a repository of a maximum of 65,000 On Demand titles that gets refreshed every week, and a GENIE HD DVR with 1 TB of storage that comes loaded with 200 HD hours-worth of recordings to save your favorite movies and shows—that too at no extra cost.

DIRECTV packages also give you access to the free DIRECTV app that allows you to watch your favorites on the device of your choice while you’re out and about.

You can subscribe to the fun-packed DIRECTV packages for as low as $59.99, and the best part is that the price remains locked for 12 months so you don’t have to worry about sudden price hikes. To sweeten the deal, AT&T DIRECTV also gives you the option to bundle your DIRECTV with high-speed AT&T Internet and AT&T home phone and save up to $240 during the first year of subscription.

What’s even better is when you subscribe to DIRECTV packages like SELECT™ and ENTERTAINMENT you get to relish FREE access to premium networks such as HBO Max™, Cinemax® to SHOWTIME®, and STARZ® for three months. Moreover, if you subscribe to CHOICE™, XTRA, or ULTIMATE plans, you get to revel in your favorite content from HBO Max™ for 1 year. On the other hand, PREMIER™ plan subscribers get access to all these premium networks as they are a part of the primary subscription plan.

If you need more information about DIRECTV packages, feel free to contact the AT&T DIRECTV customer service or call at 1-855-820-1220 anytime, any day!

What channel is MSNBC on AT&T DIRECTV?

MSNBC is on channel number HD 356 on all DIRECTV packages!

What to watch on MSNBC on DIRECTV?

You can catch all top shows that currently run on MSNBC including, Morning Joe, MSNBC Live with Craig Melvin, The Reid Out, The 11th Hour With Lawrence O’Donnell and many more exciting shows!