What Channel is Animal Planet on DIRECTV? 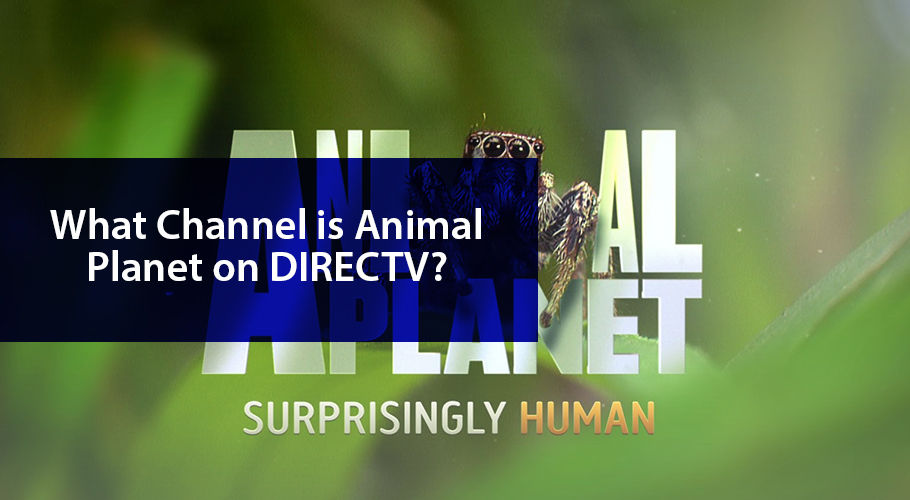 Of course, TV series and movies are good boredom-busters, but have you ever watched a mama tiger playing with her cubs for a change? Animal documentaries are the best when it comes to unwinding from the stress brewing in the world around you. Unlike being entangled in a whirlwind of ‘who ends up with whom?’ Animal documentaries mean no drama, and provide us with a great platform to learn what goes down in nature’s Animal Kingdom.

A study from the University of California revealed that our positive emotions are uplifted while watching nature shows, whereas the negative ones see a significant decline. Thus, to help us take a break from our monotonous TV routines, folks behind Discovery Network gave us a new channel—one that devoted to bringing wild animals and domestic pets under the spotlight through its series and documentaries, known as Animal Planet.

Animal Planet is currently available to approximately 91 million households across the U.S. And making it happen are the top pay TV service providers in the U.S., including industry leaders like AT&T’s DIRECTV. DIRECTV offers 6 TV packages, all with a specific number of channels to add life to your everyday TV consumption. You can go for solo TV service if you’re a diehard TV buff or take your experience up a notch by pairing it with the ultra-fast internet from AT&T.

DIRECTV is an American direct broadcast satellite TV service. With half a dozen TV plans at your disposal, you can pick the right one for yourself and family. DIRECTV firmly believes in making entertainment budget-friendly and easily accessible for all. This is why even the most basic package from DIRECTV, which relative to competition brings great value, is available at a competitive rate of $59.99/month. Now if this isn’t a catch, what will be?

Another highlight of DIRECTV is definitely the features each of its packages entails. You don’t like your subway trips back home because they get too boring? No big deal; with DIRECTV app you can take your TV with you, wherever you go. The DIRECTV App lets you rewind TV shows from the last three days on any device and you can stream DIRECTV on up to 5 devices. Plus, with the app, you can watch On Demand content and Live TV, on your own timeline.

If you like a TV show that you want to re-watch, record it using the free GENIE HD DVR and watch it whenever you want. GENIE comes with a whopping 1 TB storage. You can record up to 5 programs simultaneously, and connect up to 8 TVs via Wireless Genie Minis to enjoy the extraordinary whole-home GENIE experience.

DIRECTV brings you a life-like televisual experience through its 4K and 4K Ultra HD programming. Imagine how handy this splendid feature would come, when you’re watching nature on HD channels, such as Animal Planet and more. Plus, there’s even an on demand library with a selection of movies, series, and documentaries in 4K. So, if you’re a person that prefers enjoying content in 4K, DIRECTV could help you do that!

Dive Deep into Entertainment with the DIRECTV Channel Lineup

These features aren’t the only positives about DIRECTV. We haven’t talked about its channel lineups yet. DIRECTV offers 6 TV plans, each with a channel lineup consisting of the most balanced mix of networks—hands down the best! Be it entertainment, sports or news, DIRECTV channel lineup has something for every member of the family. Curious to explore more about the channels? We are too. Hop on as we walk through all the DIRECTV packages and the number of channels they bring along:

If entertainment is what you crave to relax with all day, every day, then take your existing DIRECTV package up a notch with mini add-ons. If you’re big on movies, the Movies Extra Pack would suffice you. However, if you’re more of a sports buff, you can add over 35 regional and premium sports networks through DIRECTV Sports Pack.

As we said a little earlier, you can enjoy DIRECTV in its solo glory, or pair it with AT&T Internet and Phone for added value. Before you decide which Single, Double, or Triple play package to subscribe to, make sure to check for DIRECTV’s availability in your area. Don’t worry, there’s no hefty science or math behind this, just make sure to remember your area’s ZIP code. Because only through ZIP you can unlock the wondrous world of DIRECTV. Rest assured, if you have home under the clear southern sky, you will catch the 99% reliable DIRECTV signal without a glitch.

Are You Fond of Four-legged Fur Balls? Subscribe to Animal Planet on DIRECTV

Besides many other pay channels on DIRECTV, if there’s one befitting for members of all ages in the family, that has got to be Animal Planet. Let’s face it, we’ve all had our fair share of bumps in the road while trying to live our lives. For a good number among us, if there’s one thing that has helped us remain sane that’ll be our pets, or animals around us in general. Doesn’t matter if they spread their wings to greet you, rub against your legs with loud purrs, swing around happily while devouring a banana, or hide nervously behind the bushes to escape ‘hoo-mans’; animals have all the power to turn our frowns upside down.

Fortunately, Animal Planet has dedicated itself to broadcasting content only about critters dwelling in the wild and a few that we dearly keep at our homes as pets. Animal Planet was launched in 1996 and initially, it was a joint venture between BBC Worldwide and Discovery, Inc. Animal Planet’s programming was directed solely towards animal lovers. This is the reason why most of the content Animal Planet aired from morning to daytime was suited for audiences of all ages. Shows like The Planets Funniest Animals where animals were caught in the act, pulling off their strangest yet funniest antics. As well as, Lemur Street, which revolved around two gangs of Lemurs always ready to take on the other, was never less than a treat to watch.

However, to evade redundancy, Animal Planet changed its programming direction and incorporated reality programs. Reality shows about Animals, really? Well, as interesting as it sounds, this factor gave Animal Planet a much-needed breath of fresh air. Shows like Animal Cops: Houston, Groomer Has It, Cats 101, and Puppy Bowl, did not only retain the loyal audience, but gained some new ones.

We got you at Puppy Bowl, didn’t we? Don’t worry, with your DIRECTV subscription you can enjoy as many Puppy Bowl episodes as you like! Fortunately, Animal Planet is available on all DIRECTV packages. It doesn’t matter if your budget allows you to subscribe to DIRECTV SELECT™ or you prefer nothing less than what DIRECTV PREMIER™ offers you. Rest assured, with Animal Planet on every lineup, you’ll always have something good, cute, and furry to unwind to after a long and hectic day at work.

What is Animal Planet Channel Number on DIRECTV?

Now that we know about Animal Planet’s availability on DIRECTV, let’s talk about another important thing and that is the channel number. To watch Animal Planet on DIRECTV, just grab your remote control and press the three digits that we’re about to mention below for every DIRECTV package that you have:

Enjoy Animal Planet on DIRECTV for Entertainment and Awes

So, don’t wait? Enjoy watching furry little critters or dwellers of the wild on Animal Planet or any other channel that you like. With DIRECTV the possibilities of getting access to the best TV channels are unlimited.