You Would Be Surprised What Mediacom in Columbia, Missouri, is Offering! 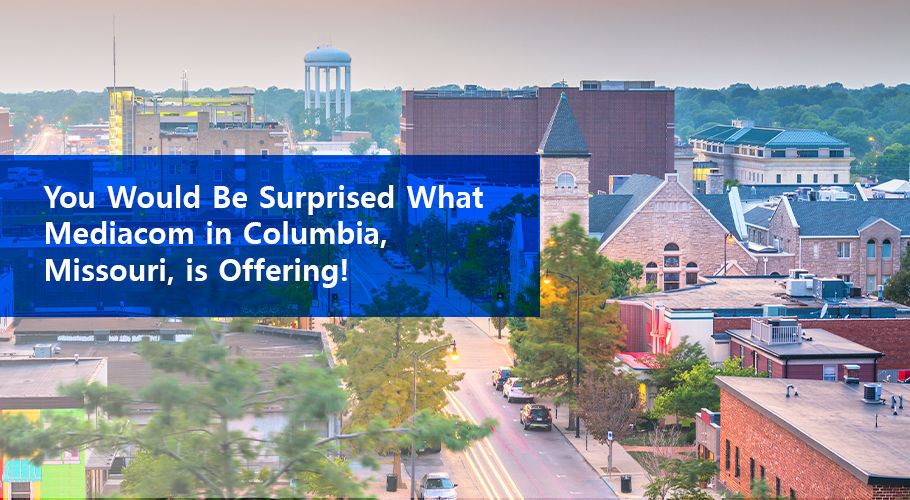 Mediacom Cable has been making waves since it was first introduced in 1995. The provider has always aimed for reasonable prices, while delivering what their customers want through continuous innovation.

The current Mediacom cable network infrastructure is vastly different from what it used to be. As it gradually transitioned to DOCSIS 3.1, a new era of cable broadband services commenced – bringing much faster, more responsive, and highly efficient than average cable internet.

For the residents of Columbia, there are a number of broadband choices available: cable, DSL, Fixed Wireless, Satellite, and Fiber. However, there are certain limitations to these services in terms of cost, accessibility, and service speeds.

Mediacom Columbia Missouri, has an impressive span of 92.1%. Though its hybrid fiber powered cable broadband is accessible in 20 Mediacom service states, the provider offers something more incredible in select markets, including Columbia, Missouri.

If you are a denizen of Columbia, you may want to know what the internet service provider has on the menu. So go ahead and find out!

Every neighborhood in the Mediacom market may be fortunate to benefit from the reliable high-speed cable broadband connectivity that marks the provider’s repute, but Mediacom Internet in Columbia, Missouri, is different. In fact, it is Xtream!

Xtream by Mediacom rests its foundation upon innovative fiber optic broadband tech, which enables your data to transfer with the power of a 100% Gigabit technology network – thus nourishing all your digital needs amply. Fiber-powered speeds from Mediacom Internet in Columbia, Missouri range from 60M to 1 Gbsp with in-between speed tiers characterized by speeds as high as 100M, 200M, 500M.

With Mediacom Xtream, no matter which internet speed you go for, you will always find it effortlessly ensuring multi-device connectivity even during peak hours – quite in excess of your expectations.

Apart from sound speed, you get a number of perks with your Mediacom internet package.

Delivering ultra-fast internet is the network’s job, but the size and shape of your house may not always cooperate in spreading it strongly enough. Mediacom comes to your assistance with its powerful in-home Wi-Fi systems.

It is recommended to opt for the standard system, if you are residing in a house less than 1000 sq. ft. – that shall suffice to ensure wall-to-wall coverage. However, if your home is somewhere between 1,000 sq. feet and 3000 sq. feet, consider taking up Xtream Wi-Fi 360 along with Extenders so you can get consistent and stable signals even in the backyard.

Internet subscriptions to 100M and higher, include Xtream WiFi 360 for the first 3 months.

Save Up On Data with Xtream Wi-Fi Hotspots

Looking at the generous Mediacom montly data stipends it is no surprise the provider is genuinely caring – for the same reason, subscribers internet juice at no extra cost, via the Xtream Wi-Fi hotspots strategically placed around Columbia, Missouri, when they are on the go.

Stream your favorite content via the Xtream TV app at superfast fiber-rich speeds when out and about - Mediacom Wi-Fi hotspots are always at your service.

The free cybersecurity is another perk in your Xtream Internet subscription - the Total Defense™ Security software protects up to 5 devices from viruses, malware, spyware, ransomware, hackers, and offers a safe browsing environment for youngsters through parental controls.

Mediacom Cable TV in Columbia, Missouri, Offers the Best Entertainment Out There

Mediacom Cable TV in Columbia, Missouri, turns Xtream along with its Internet service. The Xtream TV delivers a modern televisual experience so immaculately that one may not even feel the need to visit cinemas.

You Can Choose Your Channel Lineup

Mediacom lets you decide which TV channel lineup to include in your subscription as per your fondness for Live TV entertainment. Why pay for a huge channel lineup when you aren’t going to watch it?

So select the one where your heart goes and may be, include a mini Mediacom package or a premium channel to tailor the entertainment more to your needs.

You can watch any movie and TV show, any time of the day through Mediacom On Demand. The collection of titles in the On Demand library is huge and packed with every genre. You can access your favorite titles from correlating channels included in your subscription without incurring a cost.

Time to customize your entertainment with what you want to watch. Are you a sports fan, get Sports & Information PAK; are you a movie-goer, get Movies & Music PAK; you want child-friendly content, get Kids & Variety PAK; you want entertainment from other parts of the world, include international channels. You can even include premium channels like HBO®, Cinemax®, SHOWTIME®, and STARZ® to relish your all-time favorites.

Life Gets Easier with TiVo®

The TiVo® home entertainment setup is something from the future with its intelligent search guide that lets you find anything included in the vast entertainment content packed in your TV subscription. The TiVo DVR records 1,000 hours of SD and 150 hours of HD content, which you record any time, and stream on any screen in your home. The cherry on top is the Xtream Voice Remote, powered by TiVo® that controls your in-home cinema at the command of your voice.

The Xtream TV app lets you take your entertainment anywhere. So whether you are waiting in a queue, chilling at a café, or picnicking at a park, you can watch Live TV and access premium apps included in your Mediacom TV subscription as long as you have an internet connection.

Who said the home phone is outdated? We may have become more dependent on cell phones, but it doesn’t mean the traditional home phone doesn’t come in handy during emergencies, or when a need for better sound quality arises, and when we require low-cost domestic and international calling alternatives. That’s where Mediacom Home Phone in Columbia, Missouri, emerges as the winner as it offers more connectivity.

The service doesn’t costs much at all when bundled with Mediacom Internet, or Internet & TV services. But you get to make unlimited calls with unlimited minutes to anywhere in the U.S., Canada, Guam, Puerto Rico, and the U.S. Virgin Islands.

Mediacom Phone offers inexpensive international calling plans through WorldTalk. The WorldTalk 30 is included for free in Mediacom Triple Play packages, and if you want more minutes, subscribe to:

Mediacom Triple Play in Columbia, Missouri, Offers Everything You Desire

It’s not every day that you find something as value-packed as Mediacom Triple Play packages. These triads include everything you want: fiber-boosted internet, your choice of channel lineup and apps, and inexpensive connectivity via home phone.

It gets even better, when Mediacom Triple Play in Columbia, Missouri, saves you quite a lot on your monthly bill, as the provider brings the cost down for each service when you bundle. And, you get more for less!

If you are a lucky inhabitant of Columbia, Missouri, contact Mediacom Customer Service and grab a juicy Mediacom Xtream package for yourself. After all, the speeds and perks they offer, aren’t available everywhere and aren’t offered by many providers at such reasonable prices.

What are the available internet optionS by Mediacom in Columbia, Missouri?

Mediacom offers Xtream Internet services in the form of standalone and bundled plans, with varying levels of speeds from 60 Mbps to 1 Gbps.

The availability of Mediacom Triple play packages depends on your ZIP code. Insert your ZIP code in the Mediacom Zip tool and find out.

The Best Ethernet Cables of 2022