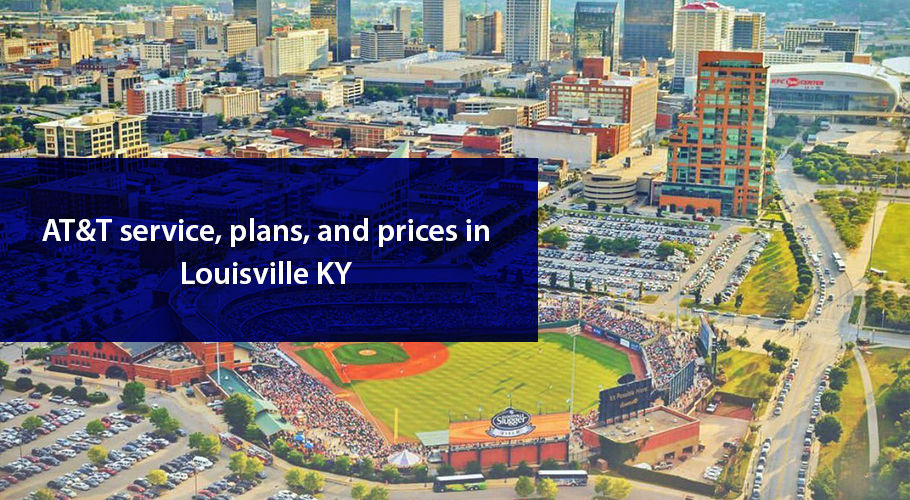 A good internet connection is more than just basic connectivity. It helps us fulfill our digital needs and simplifies our daily chores. Without it, the world might as well revert to the Stone Age. Louisville residents, fortunately, have access to 32 internet service providers, out of which 9 are residential providers. Louisville is one of the most connected cities in Kentucky, making fast internet connectivity easily accessible to 99% of the residents.

With more than 2500 service providers in the market, the U.S. ISP industry will never run out dry. Out of 2500 providers, AT&T takes the crown when it comes to quality and affordability. Its coverage expands across 21 states, including the home of the Cardinals that is Louisville, Kentucky. Let’s take a look at the Internet providers in Louisville, KY, and where AT&T stands in coverage and speed.

Only with AT&T, you can find the perfect blend of networking technologies to deliver the fastest internet speeds without breaking your bank. Whether you’re an avid gamer or a power streamer, AT&T has the perfect plan to fulfill your digital needs. AT&T internet service in Louisville ensures reliable speeds, complete 360 security, and top customer satisfaction through its internet plans.

AT&T IPBB network powers Louisville households with speeds up to 100 Mbps with unlimited and 1TB data allowance, depending on your speed tier. AT&T Fiber on the other hand boasts 99% reliability and unlimited data allowance with the fastest connection possible. The Gig service has 3 plans delivering symmetrical internet speeds from 100 Mbps to 940 Mbps.

If you’re looking for a complete residential connectivity and entertainment plan in your area, then you have got the option to bundle AT&T internet service in Louisville with TV or home phone service that comes with free perks. To make it even better, AT&T offers double and triple play bundles at exceptionally reasonable rates for Louisville families. These plans start from $70 a month, making them a steal at this price!

Let’s take a look at the AT&T services you can bundle the AT&T Internet with:

With 2 types of services in its pocket, AT&T is redefining entertainment for TV buffs. If you’re finally letting go of your current mind-numbingly boring TV service, The IPTV service and satellite TV service from AT&T has affordable plans for you!

AT&T TV is the newest IPTV service in town bringing you the best of the best content with a notable 12-month price lock. Along with the free AT&T TV app, the feature-rich service offers access to 5000 network apps, thousands of on-demand titles, 500 hours of DVR storage, Live TV streaming, free limited-time access to HBO Max™, SHOWTIME®, Cinemax®, STARZ® and EPIX® and a smart voice remote powered by Google Assistant! Up your channel count by exploring 4 different and affordable plans from AT&T TV.

DIRECTV is the #1 satellite TV service provider delivering quality entertainment, reliability, and top customer satisfaction across the U.S. While the service reaches Louisville households through satellite signals and doesn’t require an internet connection to work, the TV watching experience it offers is no different than AT&T TV

Extremely high channel count, free HD, 4K sports programming, unlimited on-demand content, and quality customer support are just some of the many perks DIRECTV plans offer. One great feature of the satellite TV service is its versatile app. The DIRECTV app has made catching up on your favorite shows on the go so much easier. The cherry on top is its free limited-time access to premium apps like HBO Max™, STARZ®, EPIX®, SHOWTIME® & Cinemax® along with the free NFL Sunday ticket.

What’s worse than your cell service bailing on you? Not having a connectivity backup. AT&T’s home phone service is the perfect backup to your cell service. With 25 calling features like voicemail to text service and three-way calling, unlimited local talk time, and highly affordable international calling rates, AT&T Home phone plans cover you internationally and locally with convenience!

So go ahead and get yourself AT&T Internet in Louisville KY in a value-packed bundle with TV and phone at discounted rates. Just call 1-855-925-2541 and the experts at AT&T will handle the rest for you.

Does AT&T have fiber optic internet in Louisville?

AT&T fiber internet service covers more than 60% of Louisville with the fastest speeds possible. The most affordable AT&T fiber plan is AT&T Fiber 100 which maxes out at 100 Mbps for just $60/mo.

Is AT&T Fiber a fast internet option in Louisville?

AT&T Fiber is widely available and the fastest fiber internet service in Louisville that promises symmetrical internet speeds up to 1000 Mbps. Spectrum delivers similar download speeds but through its hybrid cable-fiber connection.