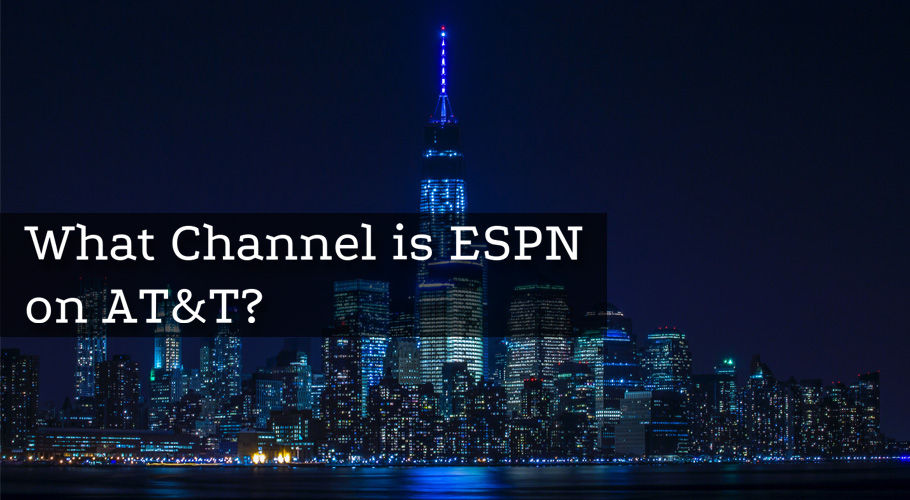 Being a sports buff is not as easy as it may seem. Think of it as a fulltime job - one that requires a lot of dedication and constant catching up with the latest happenings in the sports realm. Dealing with the sudden turn of events, and the adrenaline rush; it surely isn’t that easy to be a diehard sports-follower. However, there is one thing that makes it somewhat easy. That’s right. If a great plenty of sports’ content fulfills your daily entertainment needs, a subscription to ESPN on AT&T TV will add great convenience to how your run your sports TV regime.

AT&T TV provides an all-round array of channels to subscribers. Among those, ESPN stands as a strong favorite among sports buff across America. So, if you’re one of those whose survival depends on watching footballers pacing the yards to make a touchdown, then allow us to give you all the reasons to become an AT&T (for ESP user AT&T Español) subscriber. However, before we pivot to that, let’s discuss ESPN briefly.

How did ESPN become a Televisual Hub of Live Sports?

It all started in 1979 when America was introduced to a basic cable sports channel known as ESPN. The acronym is short for Entertainment and Sports Programming Network, and regardless of all criticism and speculations over the years, the channel stands as one of the most successful sports networks worldwide. Not only do the Americans acknowledge this fact, the rest of the world does too. Because, ESPN does not reach 86 million American households alone, rather broadcasts in over 200 countries worldwide.

ESPN TV Shows that Made the Channel Hit a Home Run

Largely speaking, sports channels are assumed to be limited to providing Live coverage of sports events only. It was therefore quite a bold move for ESPN to break the monotony and head down the route of providing the audience with the right mix of sports and drama. To live up to the expectation set in terms of entertaining programs, ESPN set up a film division known as ESPN Films in 2008 - in a bid to create original content inspired by the interesting lives of various athletes and intriguing sports events.

The founding of ESPN Films paved the way for the famous documentary show ‘30 for 30’ in 2009. ‘30 for 30’ airs to date and ever since its first episode, the show has only gotten bigger and more popular. From filming to cinematography, every episode of 30 for 30 is envisioned and executed by renowned Hollywood filmmakers. Did you know O.J.: Made in America, one of the films created for ‘30 for 30’, won an Oscar in 2017? Besides ‘30 for 30’, ESPN’s broadcast lineup is packed with other long-running shows that set it a level ahead of its competitors, such as:

This list just goes on! Imagine, if a sports channel is offering you more than just runs and reruns of different sporting events, it’d be a total loss for you to not subscribe to it. Lucky for those who have powered their TV sets with AT&T TV - they get to watch ESPN in their subscribed channel line up with any of the AT&T TV plans they decide to opt for. Plus, if they prefer watching ESPN in Spanish, ESPN Deportes is available as an add-on to keep their needs covered.

AT&T TV: Breathing Life into TV Sets Across the U.S.

AT&T stretches itself across 22 states, making its network the 2nd largest in all of America. AT&T Internet has been a part of millions of households across the country for long, and now the provider’s IPTV service is catching up too. For anyone who wants to come home to a TV that takes away the exhaustion of the entire day, AT&T TV is the one.

A feature-rich TV service from AT&T that is on the case to transform your daily televisual experience, at competitive rates. Talk about TV with no hassle!

Unlike many other services that make you wait for their equipment to arrive so you can start watching your favorite TV channels, you can start making the most of your AT&T TV subscription right after your order is confirmed. Simply visit www.att.tv or download the AT&T TV app and let the fun begin! This will surely keep you company while your AT&T TV device is on its way.

Record Your Favorites on Cloud DVR

AT&T TV offers Cloud DVR, which lets you record your favorite ESPN shows without worrying a bit about running low on storage. You get storage worth 500 hours of content, so you can keep an abundance of your favorite shows ready to tackle boredom. You can access the DVR from wherever you are. But, just to keep things transparent; the DVR service is available in the U.S. exclusively. It works with internet data over a compatible device and the recorded shows expire after 3 months.

Google Assistant Turns Your Experience into a Smart One

There’s nothing cooler than being able to control your TV with your own voice. With AT&T TV, you can use Google Assistant to keep your hands off the remote control, and inside the bowl of buttered popcorn. With the intelligent Google Assistant, you can switch between channels, navigate Live TV, sift through your Cloud DVR recordings, check what’s new in the On Demand Library, and more - all at the command of your  voice. Hey Google! Let’s see what’s on ESPN right now.

Of course, going for AT&T TV on its own is good, but it may be more than worth it to pair it with AT&T Internet. Rest assured, you’ll be in for an experience free of hassle if you decide to bundle the two services.

Catch up on baseball matches on ESPN, or the latest episode of your favorite TV series on a family entertainment channel. The extensive AT&T TV channel lineup has something for everyone in the family. An AT&T TV bundle makes it all the more convenient for you to stream your TV favorites. Because, AT&T vouches to bring you the fastest possible speed available at your address, and fulfills that promise remarkably well.

Plus, when you bundle AT&T TV with AT&T Internet, you benefit from discounted rates for both services – you can save up to $240 during the first year of your subscription. And, you don’t have to deal with the bother of paying your monthly dues to multiple vendors either.

The one thing that definitely makes AT&T TV one of the most diverse IPTV options out there is how well crafted each plan is. The AT&T TV channel lineup is well rounded and able to take care of a broad range of consumer needs – ENTERTAINMENT looks after all the TV essentials, CHOICE™ brings entertainment for everyone in the family as well as regional sports, XTRA literally gives you extra sports, news and movies, while ULTIMATE is the most encompassing line up of sports, news, movie and international networks.

If you are wondering which of these variants come with ESPN let us relieve the suspense right away. ESPN is available in its HD version in all four AT&T TV packages that you can choose from depending on your preference.

AT&T TV offers a variety of features for its Spanish subscribers as well. All they need to do is subscribe to the ÓPTIMO MÁS package and get access to more than 40 English TV channels, alongside 50 Live Spanish TV channels.

Besides ÓPTIMO MÁS, Spanish subscribers can also opt for mini packages such as Español or Deportes. Whichever you may pick, rest assured, you’ll get a guaranteed ESPN subscription with it.

ESPN on AT&T TV is a catch that you can’t miss for anything in the world! Your search for a TV service that serves as an all-rounder for your entertainment needs, ends with  AT&T TV. For a relatively affordable price tag, you get to enjoy more than just your favorite TV channels, that too from a provider which has become a household name based on its long time standing and repute among subscribers. So for a revolutionized TV experience, which allows the flexibility and ease of streaming video content, we would recommend you to join the league of thousands of satisfied customers.

ESPN is available in its HD version in all four AT&T TV packages at channel no. 206.

Is ESPN available in Spanish on AT&T TV?

Spanish subscribers can also opt for mini packages such as Español or Deportes and they will get a guaranteed ESPN subscription with it. The channel no. of ESPN Deportes is 466.