Spectrum vs. Optimum: Which One Should You Choose? 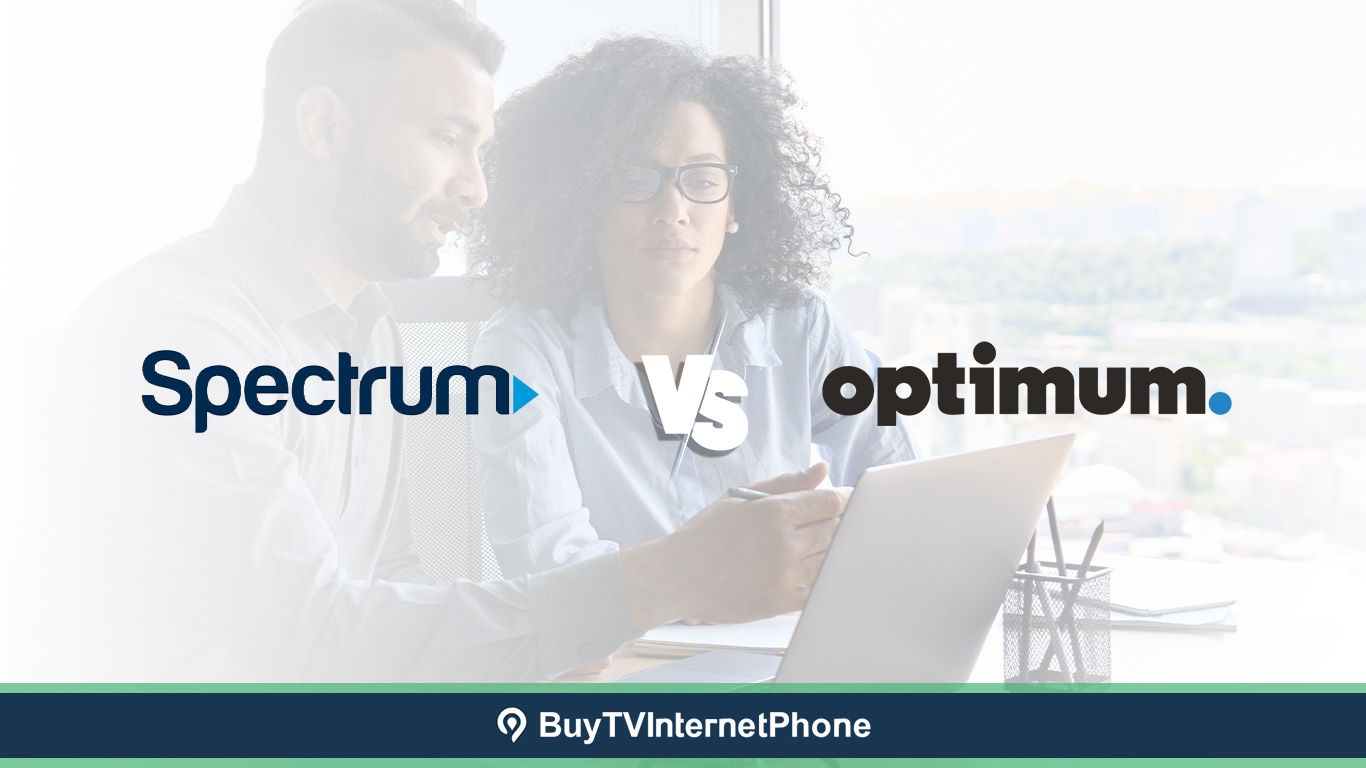 Spectrum and Optimum are two popular internet providers that have been offering the best cable internet, TV, and phone services in the United States for a while now. Spectrum may have the largest coverage with 40+ states under its wing, Optimum boasts coverage to underserved regions in the Northeast. So if you reside in the Northeastern states, you’re likely to get a choice between Spectrum and Optimum.

If you’re recently thought about switching providers or moved to a new place with a choice between Spectrum and Optimum, you must study your options and pick the one that meets your needs best.

Stacking up two popular cable internet providers against each other to pick the best one can be a tough challenge, but you’ve come to the right place looking for an answer. We’re going to compare the services, pricing, and availability of both Spectrum and Optimum in this guide. So you can make the final and informed choice. Keep reading to learn more!

While Optimum rules the Northeast region with mostly cable and a bit of fiber internet services, Spectrum is the leading cable internet provider in the United States. Optimum will offer you the best value for money with incredible speeds at low pricing for your first year, whereas Spectrum internet plans hold a bit higher price point compared to Optimum. Check out the plans and pricing offered by both providers yourself down below!

Optimum delivers quality internet to users across its service areas through a robust hybrid fiber-coaxial (HFC) network that ensures reliable fast speeds. Fiber-optic too is offered by the provider but its availability is only confined to 1/10th of its service areas.

To cater to a range of household needs, Optimum offers 4 internet plans with different speed tiers. The Optimum internet plans beat Spectrum when it comes to affordability in standalone plans. And when you opt for autopay and paperless billing, you can enjoy a $5 discount every month.

While comparing the promotional rates of standard speed tiers offered by both providers, Optimum is $10-$20 cheaper. However, Optimum’s pricing increases significantly after 12 months, and the provider only discloses its regular rates once your promo period is near the expiration date.

Spectrum wins when it comes to availability and coverage, but of course, it's going to lose out in the affordability battle. Still, Spectrum is known for its reliable and fast cable internet services that promise up to 1000 Mbps of download speeds with no added or hidden fees!

*for 12 months plus taxes

Both providers offer their users a chance to enjoy a greater value for money by bundling their internet with TV and home phone services! Optimum, however, goes the extra mile to bring real value for money to its customers by offering more channels and more entertainment at incredible rates, while Spectrum offers bundle customization so you can enjoy what you want at the price you like.

Optimum bundles let you save money on household essentials such as TV, internet, and phone and allow you to enjoy up to 420+ live TV channels, unlimited nationwide calling, and unlimited internet usage! Optimum double-play bundles start from $114.99 per month, and you can add phone service to a package of your choice for an extra $15. Check out the most popular Optimum bundle offers below.

Spectrum bundles offer entertainment-hungry users a variety of sweet deals at the best price. Spectrum no longer offers fixed Triple or Double Play Silver and Gold TV packages. Instead, now you can subscribe to the basic Select TV plan and include more services and add-ons as per your preference and budget.

Spectrum Internet + Phone bundle starts from $64.98 per month and lets you stream, play, work, and share whenever you want at a price you like! Here are the best Spectrum bundle offers for your home.

*for 12 months plus taxes

Neither of the providers charges an early termination fee, so that’s the good news. Spectrum’s wifi gateway and modem are free of cost and come with the plan, while Optimum charges a rental fee of $10 a month. You will also find that Optimum charges a noticeably high fee for installation, while Spectrum offers the same at literally half the price.

Optimum doesn’t list a fee for self-installing the system. However, the standard installation price covers the setup of one wireless device and up to 2 outlets. The premium installation covers the setup of one wired device, all wireless devices, and 3 outlets. For extra outlets, you’re charged $25 each. The good news is that Optimum offers amazing discounts on installation. Contact Optimum customer service to check out available discounts on your plan.

Spectrum on the other hand offers 2 services, where the pro installation service covers all the necessary equipment and cabling, the self-installation option lets you do all the work at a minimal fee. You will be given all the information and details of the setup by Spectrum. The self-install kit comes with everything you need to install the equipment and use the internet.

You will be happy to know that neither provider, Optimum or Spectrum, require a contract that binds you to the ISP, which also means not dealing with an early termination fee! You can enjoy all the services at a locked-in price for the first year in both cases. However, you must use the service for a month before you decide to opt out.

Both internet providers offer unlimited data to their customers. Regardless of the tier you choose, you can use the internet as long as you want without getting your data capped. Neither Spectrum nor Optimum will charge you any data overage fees for internet usage.

Optimum covers 4 major states while Spectrum’s network is bigger, expanding across 42 states. Spectrum is definitely the clear winner here in terms of availability and coverage, covering more than 38% of the United States.

Optimum covers 5 states in the Northeast, focusing on the underserved areas and reaching over 11 million residents with its hybrid fiber-coaxial and fiber-optic network. However, only a tenth of that population can access Optimum’s fiber broadband.

You can find Optimum services in the following states:

Spectrum is much larger in scope with its footprint reaching urban and suburban areas of 41 states. The cable provider boasts 32 million customers across the US, making it the 2nd largest provider in the country.

When it comes to availability and reliability, Spectrum is a good choice. The pricing appears to be a little steep compared to Optimum, however only until the promotional period ends. After the first 12 months, Optimum’s regular pricing will kick in, which might not be that different from Spectrum’s.

But if you’re comfortable with the price hikes and Optimum’s fiber is available at your address, we recommend signing up for Optimum’s fiber internet plans. Fiber offers more reliability than cable and has symmetrical speeds, which, unfortunately, Spectrum or Optimum cable can’t offer.

The best part about both providers is that neither of them believes in data caps or annual contracts, so you can make the most of their promotional prices and see which provider satisfies your needs better.

If you’re living in the Northeast region, you should check out Optimum plans if the price hike doesn’t bother you. Spectrum, however, offers greater availability, great speeds, and a free internet modem with its cable internet plans.

4.      Is Spectrum or Optimum internet faster?

Optimum delivers hybrid fiber-coaxial and fiber internet through its robust network that ensures fast quality internet service at home, while Spectrum only uses hybrid fiber-coaxial for residents. Overall, the cable internet speeds are the same for both providers. However, if the Optimum fiber is available at your address, then it wins in terms of symmetrical speeds and reliability.

5.      Does Spectrum or Optimum have faster upload speeds?

Both Spectrum and Optimum have the same upload speeds, you must take the download speed and pricing into account here.