U.S. Rural Areas with the Highest and Slowest Internet Speeds 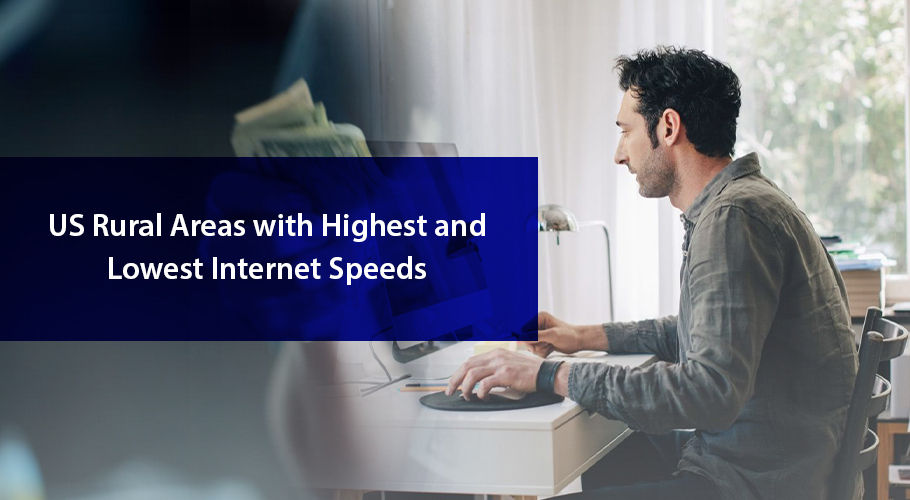 The internet has become an absolute necessity to survive in this fast-paced world — yet still in 2021, millions of Americans are deprived of this basic amenity. Pockets of poor network connectivity are visible in both small towns and cities — specifically in low-income urban regions. But people living in tribal and rural areas are more likely to have spottier coverage, slower speeds, and meager internet service providers to choose from.

Why Is It so Hard to Get Fast Internet Access in the Country?

The digital divide between rural and urban areas is far more challenging than it is often portrayed. It is a digital rift, where challenges are long-term, complex and multi-faceted.

The first and foremost is a lack of physical infrastructure, predominantly affecting rural areas. Next comes the huge cost divide, which is apparently more noticeable in, but not exclusive to, urban areas. Three out of every four Americans, who lack high-speed internet subscription, are unable to access the web. Not because they don’t have internet providers available nearby, but they cannot afford the service. So, availability is not the only thing that matters, affordability is equally essential.

Keep in mind that the internet available to rural Americans is not just slower but also more costly than it is for their urban peers. Plus, the cherry on top, a rural household income is usually far lesser than that of a urban household.

In rural America, the cost of network development is far greater than reasonable, and in some areas, it is practically impossible. The terrain can be a complication in places like West Virginia, nestled among the Cumberland, Allegheny, and Appalachian mountain ranges. In Minnesota or Alaska, the ground could be frozen stiff for over half the year, making installation of fiber or any other infrastructure almost unimaginable.

Also, rural regions that do have access to some type of internet still get significantly lower speeds compared to urban and suburban neighborhoods. For example, satellite Internet is the most widely available option in rural areas but the speeds are too slow and unreliable compared to its cable and fiber counterpart. Similarly, DSL internet is also an option in certain rural areas but the speeds are mostly slow and inconsistent. Last but not least, rural residents also have the option of mobile hotspots, but if you live in a very remote area, chances are that it won’t even work due to lack of cell phone reception.

The greatest stumbling block to building broadband networks in certain parts of the country is low population density. Most broadband providers won't offer services if they cannot get enough people to pay for them. For example, internet providers like AT&T only offer fiber broadband connections within suburban or urban regions with high population density as the cost of building fiber networks in rural areas offsets the demand. However, AT&T offers Fixed Wireless and traditional DSL internet to rural residents. The infrastructures of these broadband types are more cost-effective and adequately serve the sparse population; therefore, it is much affordably priced.

Connecting the Unconnected in Rural America

As internet access entwines even tighter with the economic growth, the need to mend the digital rift becomes more urgent and important. FCC estimated the one-time cost to fix America’s digital infrastructure to be about $80 billion. However, the funding avenues are not without obstacles. Plus, the solution proposed for universal internet access is quite ambitious, suggesting the replacement of the old telephone-oriented infrastructure with one more in line with the current internet economy.

How Do I Get High-Speed Internet in Rural Areas?

If you are stuck in an internet desert and desperately searching for a reliable internet connection, here are some of the most preferable rural internet options for you:

Fixed Wireless Internet: You can find this service in most areas with cell phone reception.

Mobile Broadband Internet: You can access this service via 3G, 4G, 4G LTE, and 5G technology.

DSL Internet: You can get this service in any area with a landline phone service.

Satellite Internet: You can get this service in almost every part of the rural area.

You can always upgrade or downgrade your internet plan based on your internet needs and budget. However, if you live in the rural part of America, the desired speeds may not always be available. So, which are the best and worst rural cities in terms of internet speeds, let’s find out!

Listed below are the top 20 slowest rural cities in terms of internet speed:

Listed below are the top 20 fastest rural cities in terms of internet speed:

Take a look at some of the best U.S. rural internet providers along with their speeds, prices, and key service features they offer:

Finding a reliable rural internet provider in your vicinity surely requires some awareness, and you don’t have to waste your time searching for the right one. The process can be made absolutely hassle-free!

If you are willing to explore rural providers, just figure out your speed requirements, take your budget into consideration, enter your ZIP code here—and you will have all available deals listed out right before your eyes.

You can also speak to an expert at 1-855-349-9328! Tell them what you are expecting from your internet service, and where you are located, and let them give you all the details and information regarding the availability of providers, plans, and prices in your neighborhood.

A fast and reliable rural internet provider can be hard to find, but there are a few like CenturyLink, HughesNet, AT&T, RiseBroadband, and Windstream that offer quality service at a decent price.

The state with the slowest internet speeds in the U.S. is Montana — located along the Canadian border in western America — offering an average internet speed of 54.4 Mbps.

Yes, rural areas remain underserved and neglected when it comes to quality internet services. According to Federal Communications Commission, approximately 22.3% of rural residents in the U.S. lack access to high-speed internet service compared to just 1.5% of urban residents.

Yes, nearly all available internet options in rural areas are slower and pricier than the services offered to urban and suburban Americans. Some common reasons behind this digital divide are vague internet service mapping policies by government agencies, expensive costs associated with building a broadband network, and not enough potential to attract ISPs to invest in those networks.