Call Now to Order
We may earn money when you click our links. ×
➤
ByTina/Provider Updates/

The Layman’s Guide to Internet Speeds 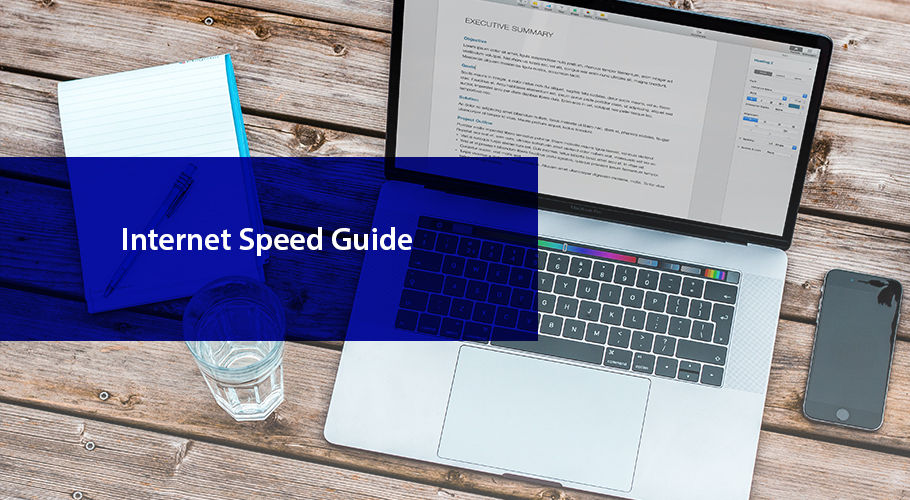 We often catch sight of internet speeds quoted in plan features advertised by different internet service providers, but do you know precisely what they mean?

Internet speed is one of the key considerations when selecting an internet service provider. It ascertains not only how rapidly you can perform daily tasks online, but also how many of those activities your network can handle at once. Unless you only browse Facebook or you live solo, you may require more than the minimum internet speed.

If the technical material goes over your head, you are not the only one. But you don’t have to feel at sea with your internet plan any longer—this guide explains internet speeds to help you become a home internet wiz.

What Is Internet Speed and How Does It Make A Difference?

Internet speed refers to the amount of data that can be sent over the web on a single connection in a given amount of time.

This makes a great difference. Because your internet speed determines what sort of activities you can conduct on the web and how many devices you can connect at the same time. Knowing how you and your household use the internet will help you find out how fast an internet speed you should get from your provider to fulfill your family’s internet needs.

If your internet speed is too fast, you could be overcompensating your provider. If it is too slow, you can bump into difficulties performing tasks on the internet like playing video games, downloading large files, or streaming HD video.

Most internet service providers advertise their speeds on their websites, however, the numbers displayed are not always accurate in terms of speeds delivered. For this reason, it is always a better approach to thoroughly conduct your research, determine the actual vs advertised internet speeds, and explore better options in your neighborhood.

You should also run a speed test on a regular basis to check your internet speed to make sure you are getting the promised speeds you pay for. Knowing the speed of your existing internet connection will also help you get the best internet package. Because when an ISP advertises a promo deal, you will have a base criterion to know if the speed it is offering is actually better than what you are already getting from your provider. And if a switch would imply more value for your money.

Arm Yourself with This Handy Internet Speed Glossary

Internet speed tells the rate at which information is transferred between A and B—for instance, from your machine to the destination server and back. It is measured in bits per second.

Bits is the smallest unit of electronic information. You must have seen the unit Megabits per second (Mbps) alongside internet speeds—telling you how fast is the data transfer rate.

Byte is also a unit of digital information, but one byte amounts to 8 bits—meaning it’s a bigger unit. You must have noticed the unit Megabytes representing file size. MBps is commonly used to denote how much of a file is downloaded or uploaded in one second.

As bits and bytes are pretty small, the quantity transferred per second is almost always more than 1,000 so to speak. Therefore, these large numbers are displayed using metric-based prefixes—Kilo for 1,000, Mega for million, and Giga for billion.

The term bandwidth is commonly taken as a synonym of internet speed, just as broadband is often confused with high-speed internet. But, internet users need to understand the subtle distinguishing factors here.

Bandwidth tells about the maximum amount of data that can be transmitted over an internet connection in a specified duration of time. More bandwidth means a connection is able to handle transfer of bigger amounts of data per second. That is why it helps in determining how many devices you can connect to the network simultaneously. It is different from internet speed in that it refers to the volume of information transmitted per second and not how fast it travels.

Broadband refers to transmission of wide bandwidth data over a high-speed connection, which is always on, and facilitates faster data transfer than dial-up internet. Broadband connections utilize a variety of high-speed transmission technologies. According to the FCC a broadband connection must deliver a minimum of 25 Mbps download and 3 Mbps upload speeds. Knowing whether or not an internet connection is broadband is helpful in determining if it can support activities like downloading a movie in HD.

The time it takes for information from your computer to reach the destination server and a response to be received at your end determines the latency of your internet connection. The outcome of this latency is the lag you experience as you wait for pages to load, for instance. You will often come across latency being confused with lag, but as we said, the latter is only the result of the former.

Similarly latency and ping rate are not synonymous—ping rate is a measure of latency. It tells you about the response time and is therefore a reflection of the latency of your internet connection. The unit used to denote ping rate is millisecond (ms), and the lower the number the better it is. A higher ping rate implies increased wait time when you are uploading or downloading information from the web—meaning more lag.

Types of Internet Connection and How That Affects Your Speed

While exploring internet plans, you will also notice internet providers offering different types of an  internet connection. Let’s see which connection offers the slowest and the fastest speed:

Dial-up technology uses a phone line to deliver the internet to your home, and it is not a broadband connection when assessed according to the FCC measure. Dial-up is considered the slowest type of internet connection and is becoming quite obsolete with time.

Traditional DSL connections utilize copper lines for data transfer over longer distances. But with upgraded DSL networks the infrastructure’s fiber backbone is extended to the “Node” making the distance traveled by data over copper lines shorter. This is one reason why DSL connections in rural areas deliver slow download speeds which max out at 35 Mbps, whereas in urban or suburban regions high-speed DSL can be as fast as 100 Mbps.

AT&T, CenturyLink, EarthLink and Windstream are among providers who use a mix of technologies to deliver high-speed DSL over a hybrid network.

Cable internet uses the same coaxial lines for data transfer as your cable TV—that is why you’d mostly see cable TV service providers offering broadband connections. This service type has the potential to deliver download speeds as high as 500 Mbps. And if the network infrastructure has been upgraded with new tech, and its fiber backbone has been extended to close proximity of a neighborhood, speeds as high as 1 Gbps can be achieved.

Spectrum, Optimum, Suddenlink, Cox and Mediacom are examples of cable internet providers that are using new networking tech to deliver a gig service in select regions.

State-of-the-art fiber optic technology uses fiber optic cables which can support ultra-fast data transmission without significant deterioration over longer distances. Fiber optic cables have been typically employed to make the backbone of a network’s infrastructure, but in recent times demand for high speeds has pushed ISPs to extend fiber lines farther out.

When fiber lines run to your doorstep you get a 100% Fiber to the Home (FTTH) connection, that is super fast and able to support multiple users/devices simultaneously. Plus, it gets you equal download and upload speeds. At this time, fiber internet is the fastest available in the market, although accessibility is still limited.

AT&T and CenturyLink are examples of providers offering FTTH connections.

Rise Broadband is the largest fixed wireless broadband provider in the U.S., delivering service in over 3500 ZIP codes.

Satellite internet is widely available by default. But based on the how it works, and the costly infrastructure it utilizes, satellite broadband is more on the expensive side, while also slower than cable. Typical satellite internet speeds however do hit the FCC benchmark of 25 Mbps for download and 3 Mbps for upload.

HughesNet is among the top satellite internet providers in the US.

How much Internet Speed Do You Need?

While every internet user will have their own definition of a good internet speed depending on their internet lifestyle, here are some basic guidelines to show the correlation between different speeds and supported activities:

Now take a look at some general minimum download speed requirements for your common online activities:

Now that you have learned the basics about internet speed, test yours. See what you are getting. Maybe its time to upgrade your plan or switch to another connection type which delivers sufficient speed to meet the needs of your entire family.

And if you are confused about how to figure out the ISPs available in your area, just enter your Zip Code here, and explore your options. Or call at 1-855-349-9328 and have experts check out offer availability at your address—they can also help choose a plan that maybe the best fit for you. Good luck!

For most internet users, an internet connection that delivers 100 Mbps speed is above average. Up to 4 users/devices can connect for remote work, virtual learning, HD streaming or playing online with ease.

What is a good speed for internet?

A good internet connection should deliver at least 3 Mbps of upload speed and 25 Mbps of download speed. An average internet user can get away with lower while heavy internet users may require higher speeds.

How many Mbps do I need for Netflix?

For Netflix, you would need at least a 3 Mbps connection to stream a standard-quality video and up to 5 Mbps to stream in HD format. For two simultaneous HD quality streams, you would require at least 10 Mbps.