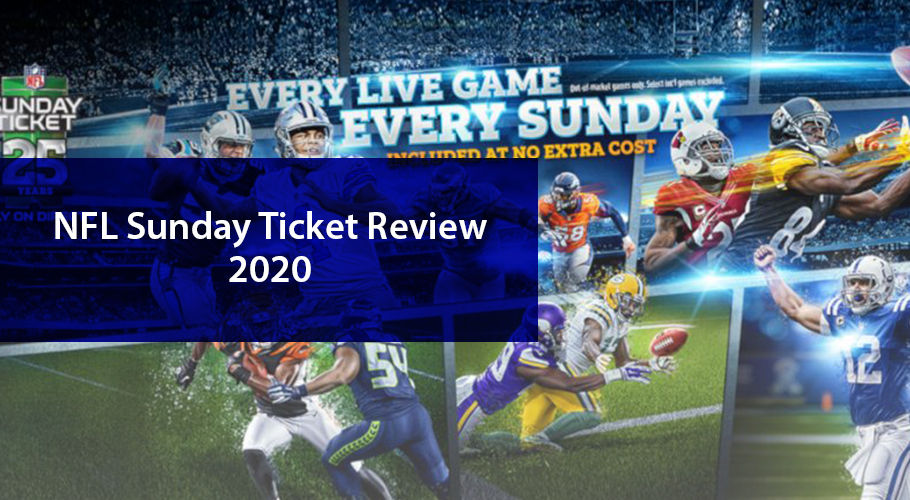 NFL Sunday Ticket is an Out-of-Market sports package. Boasting around 150 games in total from the National Football League (NFL) regular-season games, which aren’t available on local affiliates. It broadcasts all regional Sunday afternoon games from Fox and CBS for all the die-hard football fans. The viewers who subscribe to this action-packed sports package aren’t able to watch their favorite team play on local television as they do not live in the said team’s locality. So the NFL Sunday Ticket solves this quandary by bringing all the off-market Sunday Football games together on the screens of the fans.

AT&T is the only exclusive seller of the NFL Sunday Ticket in the United States until the end of the 2022 NFL season, specifically through its DIRECTV service. However, the NFL Sunday Ticket isn’t available in every area of the U.S, you will have to check its availability and your eligibility on the NFL DIRECTV website.

What is Included in the DIRECTV NFL Sunday Ticket?

The NFL Ticket is available to the DIRECTV customers who subscribe to the Choice or above package. The NFL Sunday Ticket usually hurts the pockets of its subscribers, as they have to pay for the package and the Sunday Ticket, both. If they want extra features, they can even upgrade to the NFL Sunday Ticket MAX. However, the package comes with a set of cool features that is the fantasy of every football buff, so the price doesn’t matter as long as they get the ultimate sporting experience on their screens. Plus, the ticket costs a lot less than a seat at an NFL game.

So here’s what’s included in your NFL Ticket:

Watch on Every Screen

Get instant highlights of every big Sunday game.

You can watch 4 or 8 NFL games being played on one screen simultaneously along with game clock and scoreboard in crystal-clear HD. Plus, you can expand one game on the entire screen by simply highlighting and clicking.

Get rid of the annoying commercials and stream the entire game replays in less than 30 minutes with zero ad interference.

Check up on up to 20 of your favorite players every Sunday on your TV. But it may require an internet-connected HD DVR.

Now it’s easy to stream all live Sunday afternoon NFL games and play highlight alerts from any device and from anywhere through its exclusive app with just a tap.

Never miss out on gaming scores, team stats, division-by-division standings, and more on Sundays as they are displayed in real-time to you on your TV, provided it equipped with an HD DVR.

Upgrade your NFL Ticket with MAX and get access to the final yards of every scoring drive around the league and Next Generation Stats integration all in one place. So never miss the touchdown from inside the 20.

The exclusive channel lets you follow your favorite fantasy players live from game-to-game, and access real-time analysis, stats, and more on the new Fantasy Zone Channel. Its timeslot has expanded with the pregame Sunday launch.

How Much Is NFL Sunday Ticket?

So all that goodness packed inside one nice package, and you must be wondering the DIRECTV Sunday Ticket Cost. If you are a DIRECTV subscriber, it’s easy-peasy for you to add the NFL SUNDAY TICKET or the NFL TICKET MAX to the package now, even if you are midseason.

The good news! The NFL SUNDAY TICKET 2020 seasons are available to the new Choice and above subscribers at no extra cost. And if you subscribe to the DIRECTV Premier Package, you can access the NFL SUNDAY TICKET along with 35 sports channels of different variety at no extra cost. Moreover, the DIRECTV NFL Ticket is available to actively enrolled college students at a fantastic discounted rate so they can view live out-of-market games every Sunday on any device.

The NFL Ticket price may seem like a lot as you pay the lump sum, but if you divide the whole price by 17, which is typically the number of weeks the NFL season lasts, it’s a great value. Beginning from the first Monday of September and ending in December or early January. The season will cost you $18 each week. Plus, you will be paying a $19.95 activation fee and a regional sports fee. If you want to find out what other fees you will be paying with a DIRECTV package, see the the hidden cost of DIRECTV.

However, the NFL Sunday Ticket is a bow-wrapped package for every hard-core football fan as they access all of the games at one place along with the comfort of their couch, bowl full of popcorn, beer, hotdog, and the company of their boisterous friends at a minimal cost.

How To Get NFL Sunday Ticket Without DIRECTV?

As of the 2015 NFL season, the sports service has been available through the online-only subscription to those viewers who can’t access the satellite DIRECTV service in their area or are the students of a select list of colleges.

Unfortunately, this greatly narrows downs the viewer segment eligible for the standalone NFL Ticket Streaming. If you want to determine if you are one of the lucky lots, check for your eligibility on the NFL DIRECTV website. And if you are eligible, you will pay the aforementioned prices for the NFL Ticket.

If you can’t access the standalone streaming service, a subscription to the DIRECTV packages won’t be so bad as you will not only get a FREE NFL SUNDAY TICKET but access to a broad range of programming and premium channels.

The NFL Sunday Ticket may seem expensive as you view the upfront price tag, but it more than makes up for its with its extensive collection of live off-market games along with dozens of features. And if you calculate, the NFL Ticket costs $18/week over the span of 17 weeks of the season. However, we would still recommend a subscription to the AT&T services, which will offer you a much better value of money and more benefits.

Is NFL Sunday Ticket available in my area?

The NFL Sunday Ticket isn’t available in every area of the U.S, you will have to check its availability and your eligibility on the NFL DIRECTV website.

Will I get the NFL Sunday Ticket app?

Yes you will. NFL Ticket is available to the DIRECTV customers who subscribe to the Choice or above package. it’s easy to stream all live Sunday afternoon NFL games and play highlight alerts from any device and from anywhere through its exclusive app with just a tap.

Hawaiian Telcom vs Spectrum – Which one is Best For You?

Best Channel Lineups to Settle For in 2022