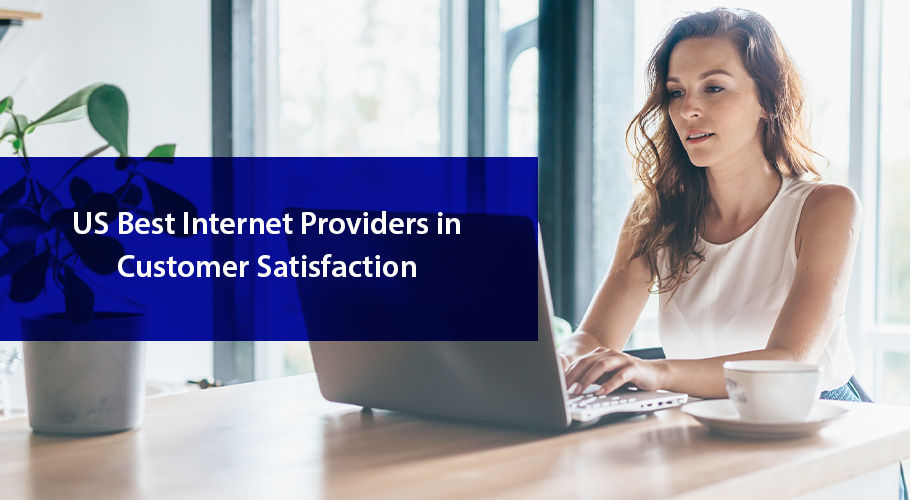 Once considered a luxury, high-speed internet is now found in roughly three-quarters of American households. Undoubtedly, it has become absolutely essential to stay connected to the internet but when it comes to picking the best internet providers, there are only a handful of features that actually set one apart from the others. Largely speaking, we would say a provider that delivers reliable service with consistent speeds while backing the service with excellent customer support can surely stand tall above the rest. Wondering which are the best internet providers in the United States in terms of customer satisfaction? Let’s find out!

AT&T rightly boasts—you deserve the best—referring to its stellar national performance in J.D. Power 2020 Residential Internet Service Provider Satisfaction Study as validation that it has got what you deserve. AT&T won the top spot in the South, West, and North Central regions, with an average score of 751/1,000 points.

Reliability is a strong AT&T suit; the provider claims 99% reliability as well as consistency of speed even at peak usage times—for services excluding DSL. The Federal Communications Commission (FCC) verified the provider’s claim to an extent in its 8th Measuring Broadband America Report—around 80% of AT&T’s IPBB customers were reported to have received 95% or more of the advertised speed.

For customers who value reliability, affordability with a variety of choice, Xfinity offers a menu of speeds that can fit a broad spectrum of consumer needs. The Federal Communications Commission (FCC) reports that over 80% of Xfinity test customers were able to get an actual average download speed of 95% or more of the advertised speed.

Talking about customer satisfaction, the provider has steadily improved over the last couple of years—and in 2020 it was up by 5 points on the American Customer Satisfaction Index relative to the year before —scoring 66 on a 100 point scale.

Xfinity also performed well in the 2020 J.D. Power US Residential Internet Service Provider Satisfaction Study—with an average score of 730 points across all four regions—earning 2nd place in South, North Central, and the East, while it stood in the 3rd place in the West.

Hopping onto the American Customer Satisfaction Index, Optimum earned a score of 65 on a 100-point scale—an average industry score. But a bolt from the blue—J.D. Power 2020 US Residential Internet Service Provider Study ranked Optimum at 693/1,000 points below the average customer satisfaction score for the East.

On the plus side, FCC reports that around 90% Optimum customers get average download speeds that are 95% or more of the advertised speed. Also, the provider maintains an impressive latency rating—of less than 0.4%—better than many of the industry’s top players.

CenturyLink is a solid but inconspicuous, middle-of-the-pack provider in terms of customer satisfaction. The provider saw a whopping 6.8% increase in its American Customer Satisfaction Index score in 2020—attaining 63 on a 100-point scale— the highest it has achieved since 2016. Meaning, it is safe to say things seem to be moving in the right direction for CenturyLink.

According to a report by the Federal Communications Commission (FCC), the speeds that CenturyLink DSL subscribers actually often fell short of the advertised download speeds at about 95%. While this sounds like not too satisfactory a result, it is nothing out of the ordinary for ISPs that use DSL technology. You can call it an above-average option, which performs about as well as can be expected from a DSL internet provider.

The bad news is that J.D. Power US Residential Internet Service Provider Satisfaction Study positioned CenturyLink below average in the West & South regions—so there is still room for improvement. On the bright side, J.D. Power rated CenturyLink above HughesNet, Suddenlink, Windstream, and Mediacom and in both the South and West. CenturyLink also secured a place above Spectrum in the West.

In areas where CenturyLink Fiber is available, customers are likely to have a far better experience. Also, the provider does not include any long-term contracts so you can pay month-to-month without the fear of a hefty Early Termination Fee—another great feature of the CenturyLink service which serves the interest of the consumer.

Spectrum’s claim to fame is the reliability and consistency of its hybrid fiber-coaxial broadband service. According to the report by Federal Communications Commission (FCC), about 93% of Spectrum users were able to receive an actual average download speed that was over 95% of the advertised speed. This makes it one of the best-performing cable internet providers for this metric.

Recently, Spectrum has been seen to perform in a far more satisfactory way with its customers than has been witnessed during the years since the acquisition of Time Warner Cable. Spectrum was able to improve its American Customer Satisfaction Index 2020 score by 6.8% over last year. However, the score—63 out of 100—ranked Spectrum behind AT&T, Xfinity, CenturyLink, and Optimum and placed it 2-points below the average for all providers.

Clearly, there are still areas with potential for improvement. Because even, the J.D. Powers 2020 US Residential Internet Service Provider Satisfaction Study placed Spectrum consistently below regional averages. In the South, the provider was successful in achieving its own highest score—732 out of 1,000 points—but even that placed it behind Cox, Xfinity, and AT&T as well as below the regional average of 738.

On the plus side, Spectrum does not force its customers into long term contracts, so service works on a month-to-month basis. Spectrum takes pride in offering residential internet plans free of data caps, and making its fiber optic internet access for businesses deliver up to 10 Gbps fast connections. The cherry on top if you sign up for a specific Spectrum bundle as a new subscriber, the provider will help you buy out your old contract’s ETF up to $500. Plus, all Spectrum internet customers get to benefit from unlimited access to millions of WiFi hot spots nationwide.

Now that you have a good idea about the best internet providers in the U.S. in terms of customer satisfaction, you’ll be able to analyze and choose better from among the options available near you. Once you have shortlisted the providers and plans that could suit your requirements, we recommend you ask around in the neighborhood talk to those who are already using these services. This will give you a first-hand idea of the real-time customer experience and prevent you from any issues in the future.

Many internet service providers  offer value packages with appealing perks, backed by 24/7 reliable customer support— get in touch with professionals at 1-855-349-9328 to find out the best options for your internet needs from ISPs operating in your area.

Which are the best Internet providers?

If you are looking for cable or fiber-optic internet plans, you can go for the likes of AT&T, CenturyLink, Spectrum, Optimum, and Cox Communications. But if you live in a remote location where choices are limited, you can opt for HughesNet satellite internet.

Where to find the best Internet in the US?

Which ISP has the cheapest and best Internet service?

If you are looking for some cost-saving internet options but don’t want to compromise on quality, we would recommend you choose from Xfinity, AT&T, CenturyLink, or Windstream—depending on what’s available in your area. For more comprehensive overview of cheap plans explore here.

Which ISP has the best internet in my area?

The best internet service in your area depends upon which providers are serving your ZIP code. Run your ZIP code here and see all available internet providers with an assortment of their offerings at your address.

Which Internet provider has the best customer service?

Based on the performance of several providers in J.D. Power 2020 Residential Internet Service Provider Satisfaction Study and the American Customer Satisfaction Index (ACSI), we would rate AT&T, CenturyLink, Spectrum, Optimum and Xfinity as the best in terms of customer service.