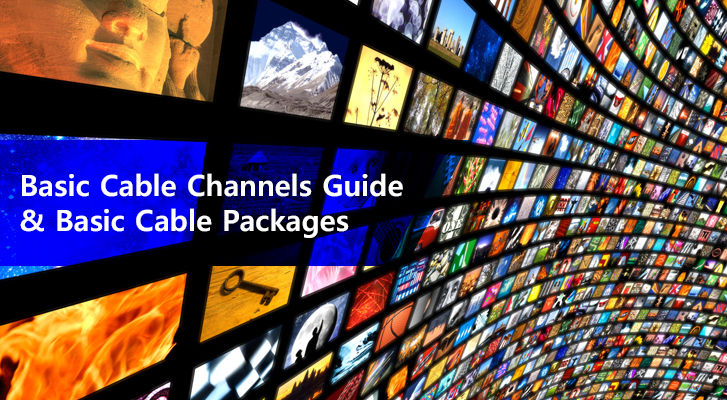 These days cable services promise to give you the world. Their packages offer DVR systems that can store a year’s worth of your favorite shows as well as the provision of access to hundreds of channels. They offer Triple Play packages that include TV, phone and internet services to take care of all your needs and they also help you subscribe and pay easily from the comfort of your couch. However, the flashy deals bombarding your screens might just lead to further confusion and make you indecisive, not to forget, the price tags they carry, reflective of the luxury they entail, may prove burdensome for your pocket. There are quite a few of us with limited time on our hands who are unwilling to spend exorbitant amounts of money on packages they know they won’t get the time to usefully. And then there are those too, who just want simple things in life, like catching up on the news or killing time with a little TV entertainment. If that’s the case, you might want to subscribe to Basic Cable instead of being lured into a fully loaded triple play.

What is Basic Cable?

Basic Cable is the type of package offered by providers that is cheaper than the cheapest they advertise. This package offers local channels as well as national broadcast networks like NBC alongside a few others mandated by the Federal Communications Commission. While movie junkies and entertainment seekers may find it underwhelming, for some of us this is a dream come true.

Essentially, all providers are required by their local franchising authorities to offer Basic Cable packages at affordable rates. The prices are negotiated by each provider with the local authorities and thus vary from one area to another and also among providers themselves. It is important to note however, the basic cable package remains elusive to many while some never even hear about it.

While local franchising authorities require all providers to offer a basic package at affordable rates, cable companies are not obligated to advertise them. Given such plans are not lucrative, it is understandable why they would refrain from investing money towards marketing them. When you approach cable providers, most of them will want you to purchase their Double Play package, which includes TV and internet, or Triple Play package, which comes with a TV, phone, and internet, along with premium channels and fancy set-top boxes; after all these extra offerings are more profitable for providers. While this practice is understandable, it doesn’t help solves your dilemma. A lot of people may revel in bundle deals that will save them money, but you should know there are cheaper options available out there. To avail them, however, you will have to ask for them

As the name suggests, Basic Cable is basic. The package includes standard broadcast channels like CBS, PBS, FOX, ABC among others. You will also be able to watch some local government channels as well as public-access ones. If you want a little more, do remember, some cable providers offer a somewhat more expensive expanded Basic Cable package too.

Expanded Basic Cable package offers a host of extra channels as compared to the limited Basic Cable package, but to be clear, it still is pretty basic. Channels include the likes of ESPN, CNN and FOX News. The channel lineup usually varies from provider to provider and for a complete list, you might want to consult your particular cable provider.

The above table lists the channels commonly offered both under the basic cable package and the expanded basic cable deals, albeit the lineup for expanded basic cable does tend to vary depending upon the provider. If they do not fulfill your needs, you might want to opt for another, more expensive package that offers you a more extensive channel lineup and a wider variety of options to view premium channels. Depending on the provider, this might not cost you a whole lot more or imply a huge jump in pricing that proves difficult to justify in your budget. Just be mindful, pricing also differs from area to area therefore in order to get an accurate quote you must consult with the cable providers active in your area. Below is a list of cable providers and the channel lineup for their basic cable packages. Scroll down to see which fits your needs the best.

Xfinity offers one of the cheapest basic cable packages we’ ve found. Starting at approx. $18 per month for the limited basic cable, the lineup includes:

Spectrum basic cable plan starts at around $24 a month, depending on the area, and includes a total of 15 channels. Read on to find out if you want to know which channels are included:

The expanded basic cable from the Charter Spectrum, on the other hand, costs $64.99 per month (the regular rate applicable after 12 months of promo period - during the promo term the package costs $44.99/mo.) and includes more than 125 channels.

The expanded basic cable package from cox brings you more than 140 channels at $69.99 a month. You can review the lineup for both and depend on your channel preferences to choose the one that better fits your needs and wants. Given the widespread coverage, the aforementioned three major cable providers are sure to cover your area. If however, you want more provider options, you might want to take a look at your local providers and the basic cable they offer. We find they usually offer a greater channel lineup for the basic package. Here’s another list we hope you find useful.

Optimum offers 40 channels as part of its Basic Cable package, the most by any cable provider we’ve discussed here. If these channels appeal to you it could be a perfect choice, but keep in mind Optimum is primarily operative in Connecticut, New Jersey, and New York.

Cable One, similar to Optimum, offers a number of channels in its basic lineup, but unlike Optimum, it covers a larger area offering services in Idaho, Mississippi and North Dakota.

Another option you might want to consider is RCN. Primarily operating in Massachusetts, New York, Pennsylvania, and Washington DC, it offers a total of 26 channels in its Basic Cable package.

ADT Security Review 2022: What You Need to Know…

A Guide to MetroNet Customer Support